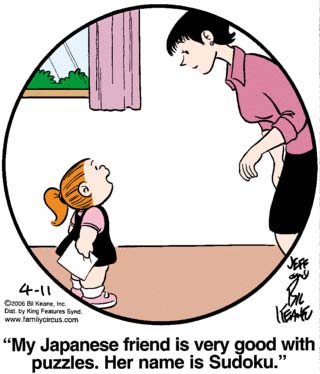 Ah, the desperate stab for relevance! See, Sudoku’s all popular now, and it’s Japanese, and … heh. Relevance. You see. Well, as a typical reader, let me assure you: it didn’t work. The Family Circus appears right under the Sudoku puzzle in my paper, but it still didn’t make this cartoon relevant or funny.

Also, this cartoon? Deeply racist. Sudoku means roughly “Single number,” and it’s an abbreviation for a larger phrase that means “the numbers must occur only once” (“Suuji wa dokushin ni kagiru”). It is not, in fact, anybody’s name. Keep right on writing those letters to the editor, Sarah Ditmars.

This is an awesome meta-moment … but Ces, you tease us. We all know that whatever Ted’s new job is, it won’t be as good as any of these.

In addition: Tan shirt? Just-one-shade-darker tan pants? Electric blue tie? Ted Forth is not gay, everybody.

I think the commentor who suggested that Trey Davis’ t-shirt is foreshadowing has hit the nail on the flat-topped head: Gil Thorp must be determined to match Funky Winkerbean and Doonesbury with a depressing Iraq War storyline of its own. Of more immediate concern is the snoopy reporter in panel three, who is clearly Andy Dick in a bad wig.

Hey Gunther, even if she did want you to put on a dog suit, this is girl who you forced to dress up as a giant pen at a comics convention in your doomed bid for fame last year. You might want to dial down the self-righteousness while you’re adjusting the invisible control panel on your forehead there.