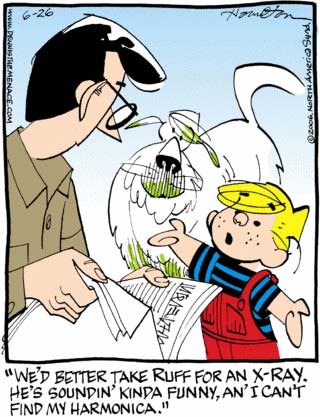 Here’s one for the Crappy Coloring Chronicles: does poor Ruff have mold growing in his fluffy white coat? One of the fraternities at my college had a St. Bernard that they used as a mascot but otherwise left to wander the campus unattended, and he often had something greenish and inappropriate growing in the folds of his fur, so it can happen, but Ruff is the cared for by an Eisenhower-era nuclear family unit, not twenty or so perpetually drunk and irresponsible 19-year-old layabouts. This actually reinforces my belief that the coloring of the daily comics is done in some steamy tropical locale where the wages are shockingly low and mildew grows in everything. Either that, or it’s done by robots who are wholly unfamiliar with carbon-based forms of life.

I know it’s really just the crappy quality of this graphic, but I’d like to believe that Mary’s eyes are rolling back in her head as she struggles to comprehend the fact that Dr. Jeff has finally managed to extract himself from her clutches. The bold-italics of that last phrase in Jeff’s word balloon implies a certain note of triumph, and the way he holds up his wine glass for a toast shows that he’s going to do this dump job in style. Mary is enjoying a glass of human blood, as is her wont.

Meanwhile, in Gasoline Alley, a small child is about to be eaten by a bear.

In Six Chix, a proud young person punches an old woman in the face. 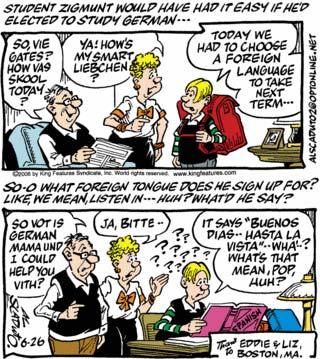 And in TDIET, a German family is baffled by the idea that non-Germans might be of interest to anybody.