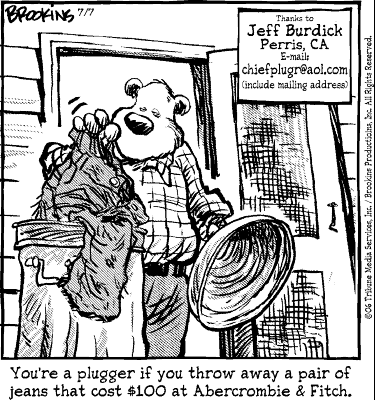 OK, now I’m starting to get freaked out. Twice is a coincidence, but three times is pretty damn peculiar.

Gosh, Elizabeth, that sounds like quite a lot of things to do! But it’s understandable that you’d be so busy when you’re switching jobs and moving all at once. That can be pretty stressful. At least you have a stable relationship you can rely on for emotional support. Say, what was that first thing you said you had to do again?

Wait, I didn’t quite catch that … where are you getting your car? 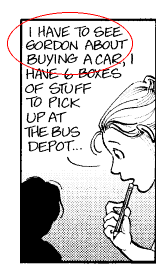 Good ol’ Gordo! I wonder whose happy, smiling, perky face you’ll see at the cappuccino bar while Gordon’s looking up the prices for the undercoating?

Been nice knowing you, Paul.

Speaking of sad sacks with mustaches, I give you … Aldo Kelrast! Whose last name is, as many Jumble aficionados in the comments pointed out, an anagram for stalker. And whose chest hair is on proud display. This would be acceptable if he was sporting some colorful ethnic garment from the Mediterranean, but a off-red polo shirt? Squaresville. 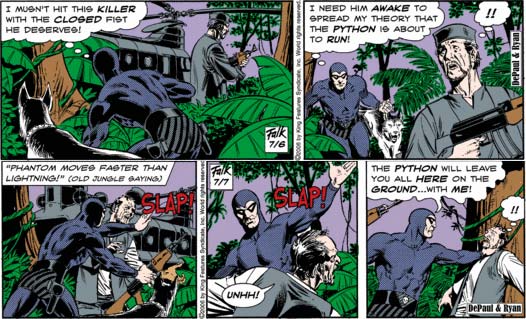 OK, I had to back up a day to show you the awesome set-up for the Big Purple Dude’s two-panel-long slapathon. He has to psych himself up, thought-balloon-style, in order to not punch someone. These two strips also showcase two of the Ghost Who Slaps’ special powers: his super-scary voice and his awesome stripey ass. 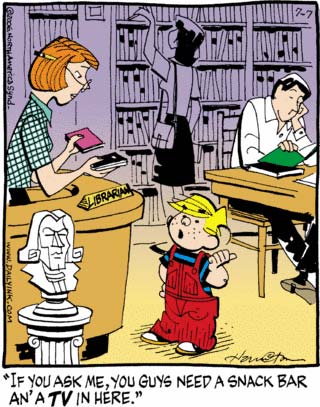 Then it’d be a Plugger library! Haw haw! OK, that was just mean.