I’m betting that somewhere in Six Chix’s marketing material, the phrase “fresh new voices” or a close variation thereupon appears. Thus, it’s all the more distressing to see the strip do a joke that appeared three weeks ago in They’ll Do It Every Time.

Of course, TDIET can’t let itself get shown up by a bunch of broads. No, it’s gotta up the ante! 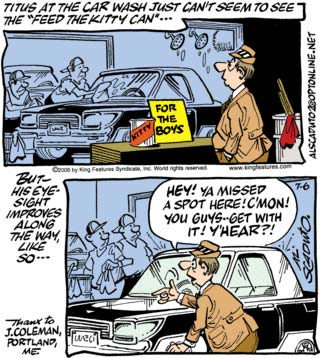 My love for TDIET grows ever deeper by the day, in large part because the idioms and phrases it uses seem to exist in a world all its own, a world that hasn’t changed since Ike won his second term. I’m not sure when the phrase “kitty” was last used for a tip jar, nor have I ever heard anyone refer to tipping as “Feeding the kitty.” But I’m going to start using both phrases as often as I can, to try to bring TDIET to life. I do like the fact that Titus (’cause he’s tight-fisted, get it?) is watching his car being washed from another room. Maybe it’s a two-way mirror down at the station house and the “boys” are interrogating it.

It’s kind of unnecessary for Katherine to point out that she’s not Randy’s birth mother, since they appear to be roughly the same age. In fact, with those knowing glances they’re giving each other in the last two panels, I’m thinking that there’s gonna be lots of long hours on the campaign trail where they’ll be … learning how to use chopsticks, if you get my drift.

Katherine clearly will be able to use her psychokinetic powers to help Randy get elected — her fingers are glowing like E.T.’s! Speaking of which…

I’m sure I’m going to have many, many weeks to goggle in awe at Mary’s Captain Kangaroo-esque stalker, so I’m going to focus my remarks here on her electric finger of power. Specifically, it’s pretty cool. Back off, stalker man! She can taser you with her mind!