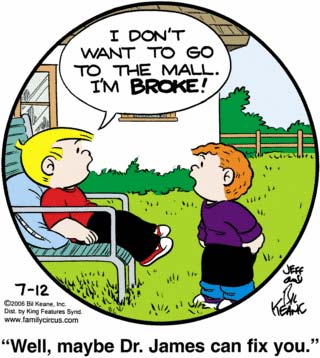 In the latest salvo in the long-running passive-aggressive War of the Family Circus Brothers, Jeffy calls for Billy to be castrated.

I know I’m an effete East Coast intellectual who would shriek like a girl and run away when faced with an actual gun, but … does it seem a little bit weird that that Ranger Rick thinks he’s going to be able to kill Arrow-Butt Grizzly when he hasn’t even tried to tranq-dart him yet?

Getting back to topics that effete East Coast intellectuals are suited to comment on: is Mark a damn handsome sumbitch in panel one, or what?

Meanwhile, Ben Franklin has travelled forward to 2006 in a time machine of his own design to see what’s become of the great nation he helped create, only to be defrauded by Marty Moon.