OK, I know Apartment 3-G is forbidden by law from being sexy, but … Lucy swaps spit with Captain Brushcut in an elevator, and then ends up slightly disheveled but fully clothed on his couch? Lamest. Extramarital affair. Ever.

I do like the trepidatious way in which she’s regarding the slightly open doorway. “That color … oh, crap, please tell me I didn’t go home with that tool Seth from my poetry group, who’s always wearing those hideous electric blue suit jackets. Note to self: eat something after the fourth cosmo from now on.”

Here’s something that you may not believe or even agree with: though I don’t find Curtis funny most of the time, I have come to admire it. Unlike so many, many syndicated strips, it doesn’t phone things in; there’s almost always a wealth of details that reward examination. I particularly like the use of the double-wide second panel to show the Curtis POV church lady panorama, with Curtis’ horrified head dead center. I’m even willing to overlook the inappropriate quote marks in the final panel just because the idea of Curtis hoping to be freed from these women by death’s sweet embrace makes me laugh.

(Tangent: This past weekend we went to see a free outdoor concert by a Latin-y/swing band that a friend of ours is in. Towards the end, this adorable little ham of a child, somewhere in the six to eight range, ran down in front of the stage and started busting a hilarious and surprisingly successful series of circa-1986 breakdancing moves. He was wearing a ludicrously oversized baseball cap that kept falling off as he would spin around on his back or whatever, and ever time he picked it up, he’d be careful to put it back on a more or less the same jaunty angle at which Curtis is rocking his own chapeau here.)

In case you’re wondering what Crankshaft does to supplement his meager Social Security checks during the summer when he’s not driving a bus, this week has the answer: he drives an ice cream truck, though this seemingly benign profession should not be taken to indicate that he’s open to compromise on his fundamental and general hatred of the human race. Strips in this storyline so far have featured Crankshaft engaging in such par-for-the-course prickery as taunting people at a Weight Watchers meeting, being rude to children, and, as depicted here, refusing to deploy even basic customer service techniques. It all strengthens my conviction that this strip should be given the slightly longer but much more descriptive title Jesus Christ, Ed Crankshaft Is Such An Asshole. 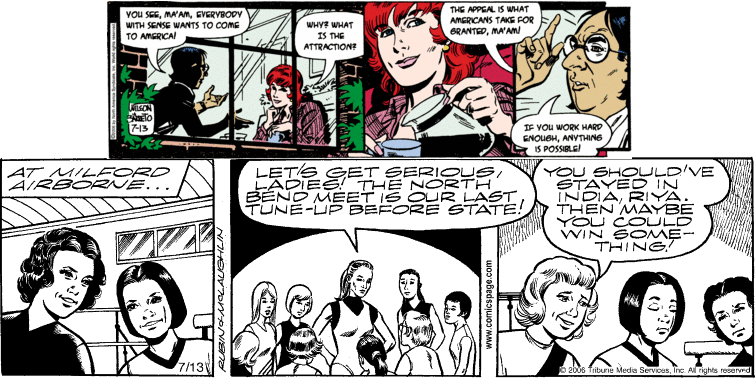 Boy, Raju is sure going to be disillusioned when he signs up for his first American gymnastics class.