Wow! I go away for a few days to spend a little quality time with my mom and now I’ve sat down to do some bloggy stuff and found that you guys have made … some comments. A lot of comments. An extra large number of very funny comments.

I bow down to your comics obsessiveness. I was going to skip over the days I flaked out on, but now I see that you all deserve better than that. Thus, today I offer you quick takes on the weekend’s strips just past.

As has been widely noted, the new Judge Parker artist, after a very strong start, seemed to suddenly come to the totally understandable conclusion of “Holy crap, this is Judge Parker, why the hell am I putting any work into it?”, and the quality of the lettering and, to a lesser extent, art suddenly declined. It’s still an improvement over the previous artist, who made everyone look vaguely like one another and not-so-vaguely like monkeys. He also deserves kudos for making Horace look at least quasi-human. For your reference, here’s old-artist Horace:

By the way, if the phrase “more than just a business relationship” doesn’t make your gaydar ping just a little, then you and I have very different agendas in reading Judge Parker, my friend. It adds a particularly twisted twist to Horace’s desperate attempt to get randy young Randy married off to somebody — anybody — before enduring the public scrutiny of an election.

Like any true Mark Trail aficionado, I find this strip totally unrealistic. Everyone knows that Kelly Welly wouldn’t beat around the bush, but would just say “bear penis.”

You know, I think this strip is really sweet. I mean, in this go-go, youth-focused world, it’s nice to see a depiction of the sort of gentle, loving, but still very deep intimacy that builds up over the decades of an essentially decent marri… oh, who am I kidding. PLEASE GOD DON’T MAKE ME THINK ABOUT ELLIE AND JOHN DOING IT NOOOOOOOO!!!!!!

You know, for a strip as manic as Gil Thorp, the wordless final panel here is almost shocking. It really brings home the sad and quiet desperation behind a character who’s usually full of bluster. It almost makes you feel sorr… oh, who am I kidding. WEEP, MOON, WEEP! YOU’RE SCREWED! SOON YOU’LL BE IN THE POORHOUSE! MOO HA HA HA HA HA! 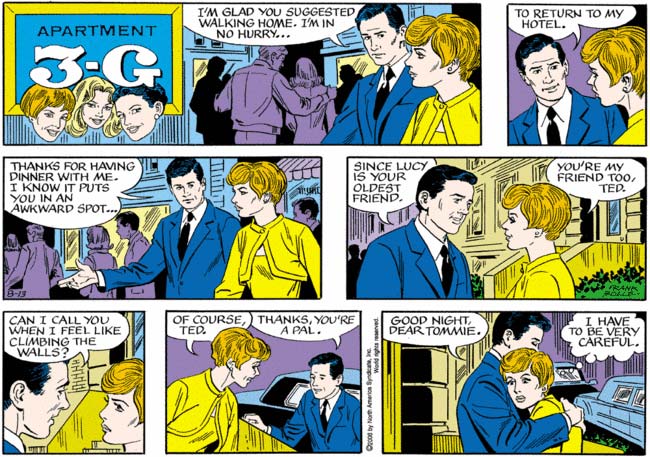 You know what’s important to creating a storyline about underlying sexual tension? Having it involve at least one character who we might believe to have some sort of inner sexual persona. I’m not sure how either of these sad sacks would react to some sort of potential romantic relationship, but I’m pretty sure it wouldn’t be sexy. Tommie’s look of panic and confusion in the final panel seems about right.