I can no longer get worked up about the fact that B.C. makes jokes about semi-obscure aspects of golf culture as if everyone’s going to get it, or the fact that said jokes aren’t funny even for those who know what the strip’s referring to. However, I do have to object to this strip being based around not just a lame-ass joke, but the totally incorrect genre of lame-ass joke. The fact that whatshisname and, uh, the other one are standing around the “Show Me” rock means that this ought to be an example of the strip’s patented non-hilarious “Show Me” joke, where the cavedude on the left starts a sentence with “Show me” and the cavedude on the right comes up with a pithy and supposedly witty response. (Actual non-hilarious example from 1990 that I found online: “Show me a girl who curls up with a good novel every night…” “…and I’ll show you a broad who lives in a bookmobile.”) This strip may provide evidence for one of my darker suspicions: that Johnny Hart has dozens of predrawn “Show Me” strips (and, presumably, “You Know” strips and “Wiley’s Dictionary” strips) just waiting for the dialogue to be filled in, and today he was so worked up about rude golf spectators that he just sort of forgot that he was supposed to do a “Show Me” joke.

The saddest part is that this bit could actually have been done as a legitimate “Show Me” strip: “Show me a golf tournament where they shout ‘You the man!’…” “…and I’ll show you a golf tournament that sells tickets to morons, too.” It does some violence to the joke and isn’t very funny, but hey, this is B.C.

Boy, when this Mark Trail storyline got started, it seemed like it was going to be about poaching. Three months ago, who could have predicted that it would climax with an angry mob led by a sinister chicken-kicking beekeeper attempting to kill a lovable, confused tame bear who almost killed her owner by french-kissing him while he was driving? How do they come up with these twists and turns for the plot? I bet it helps to be totally insane. 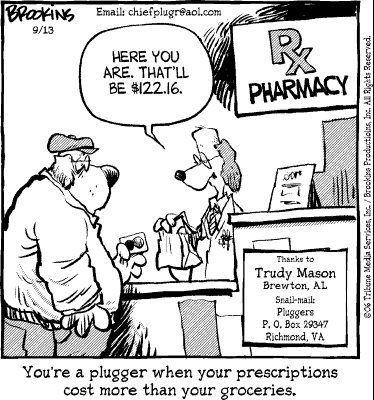 You’re a plugger when your prescriptions cost more than your groceries, but every time anyone tries to discuss some kind of socialized medicine program, you start ranting about “God damn liberal commie Hillary-care.”

And that was the day that Tommie decided for sure that she liked girls better.