%$(^, that is one #)(%&ing angry brunette. Everyone’s going to be marveling at Tommie’s massive head bobble in panel three, which makes it look like she’s a Victorian governess who’s never, ever heard a swear word before, but the motion lines I’m more interested in are radiating from Margo’s clenched fist in panel one. This chick looks like she’s about to haul off and punch somebody — somebody like Eric Mills, or, if he’s not available, his niece.

Who knew that being a party planner for the rich and capricious was so stressful? First it was peacocks running amok, now she can’t get her client on the phone when she’s at the crucial point in her delicate negotiations with the Kidz Bop Kids. Considering the fact that her last big event never happened, and this one is heading in the same direction, I do hope that Margo bills by the hour, and once a week.

Speaking of women who look to be on the threshold of fisticuffs, check out the numb, wide-eyed expression on Clovia’s face in panel three here. Clovia has been on the verge of snapping for about the entire time I’ve been reading this strip, largely due to her husband’s complete lack of redeeming qualities. Once the killing spree begins, it’s only going to start with Slim. Note the difference in technique: while Margo is going for the classic knuckle sandwich, Clovia has her index knuckle somewhat extended, as if her first objective will be to gouge out an eye.

Some of you might be saying, “But Josh, Lacey died in 1998!” Well, duh. Since she’s deceased, she can be summoned up by the God of Comics and sent into various strips as a sort of troubleshooter to solve problems and right wrongs. This explains why she doesn’t even know why she’s moving into this well-appointed condo complex: the God of Comics likes to reveal His intentions a little bit after the scene has been set, just like Charlie’s Angels’ Charlie. But I don’t think I need to explain to you what grievous recent wrong needs to be avenged in this feature. I think the stage is being set for one of the most titanic Battles of the Biddies that the comics has ever seen. That squirrel is getting out while the getting’s good. 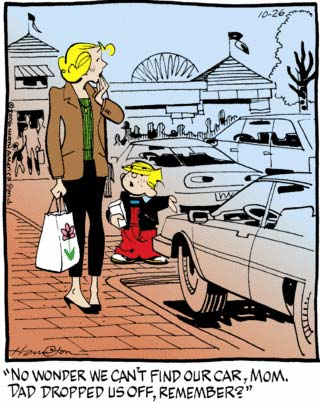 “Don’t you remember, mom? He was saying stuff like … ‘This sham of a marriage is killing me’ … ‘You and your little brat can rot at the Gap for the rest of your life for all I care’ … ‘You’ll be hearing from my lawyer’ … ‘Thank God the house is in my name’…”

Seriously, who doesn’t remember how they got to the mall? Who gets dropped off at the mall without a plan for how they’re going to get home? Is Mrs. the Menace high? She looks kind of high to me.