As the Liz-Anthony storyline grinds on to its terrifying and seemingly inevitable conclusion, all of North America can only look on in horror.

I was physically unable to bring myself to comment on yesterday’s foobery, in which Liz, who up until fairly recently had an exciting and adventurous life, declared herself “unaccomplished” compared to Anthony because he had a child and owned property. While clearly parenthood and ownership of a bland suburban box is the height of human achievement in Foobonia, the sad truth is that the house was no doubt purchased largely with the money from Thérèse’s unspecified-but-implied-to-be-high-powered job, and as for the baby, well, if you’re married, for most people it actually takes more planning and effort to not have a baby than it does to have one. I suppose it’s an “accomplishment” that Anthony convinced his wife to have sex with him despite their obvious mutual dislike. Of course, now Thérèse has left both home and baby behind because she’s a totally unrealistic straw-woman character designed to make us feel sorry for Anthony totally evil, nonmaternal, career-focused bitch, leaving Liz an opportunity to get closer to her dream guy, who likes to hang out in his basement office with his caged toddler.

All this aside, though, this morning I had a brainstorm about why the Liz-Anthony pairing is so perfect. See, motherhood is a necessary component to a woman’s life, unless she decides she’d rather not be a parent is a totally evil, nonmaternal, career-focused bitch like Thérèse. If Liz weds Anthony, she’ll get to experience the soul-completing joy of being a mommy without having to have icky sex.

OK, so this wacky Lu Ann adventure, with the lights turning on and off and the odd instant falling asleep and the sepia-toned dream sequences … it’s really … weird, right? It’s not just me? It’s OK that I’m creeped out by the command in the last panel here? Who’s going to keep her safe, dammit? Who?

You’re one to talk about addictive behavior, lady. You’re the one who appears to be sitting at a bar in the middle of your house. 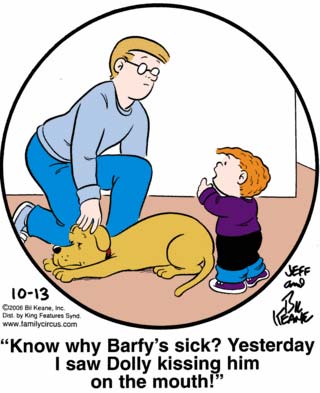