You know, it’s kind of depressing that Beetle Bailey spends so much of its energy on the sexual frustrations of a pathetic old man. He wants to have sex with his secretary, his wife wants to have sex with him, blah blah blah. I personally would have liked to have been a fly on the wall at that sensitivity training. “But … but look at the way she’s dressed! I have to pound something!” 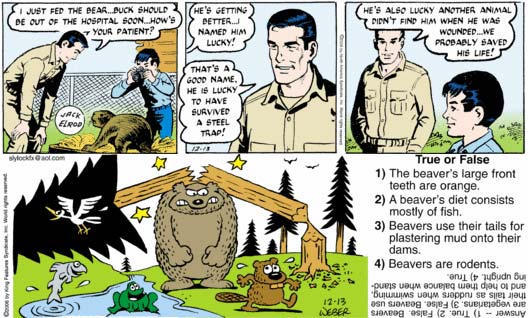 Congratulations, Mark Trail: I’ve read you for years, and you still keep me guessing. Usuallythe noise of the gears grinding as one plotline shifts to the next is audible from miles away; yet here we are, three months after the triumphant fisticuffs, and this damn this is still meandering along. At least we get to see what Rusty’s disturbing and lonely home life is like: taking many point-blank pictures of wounded, confused animals wandering around in a pen.

Faithful reader and long-time Mark Trail devotee MossMoses points out that the Trails not so long ago adopted a flightless goose that they called Lucky, which conflicts with the new name of our little beaver friend. But I think Mark took care of that: what do you think he fed to the bear, eh? Watch out, Lucky Beaver: the next adorable wounded animal that comes in here and you are Molly chow. I’ve appended today’s Slylock Fox to show you how that scenario will play out.

So self-loathing, fake-hero-turned-real-hero, lounge-singer-named Stormy Hicks will finally be getting that commission to the Naval Academy he’s been dreaming about — not because of his heroism and honesty, and not because of the recommendation of a trusted coach and mentor, but because his girlfriend’s dad bankrolled the early stages of his Congressional representative’s political career, and now it’s payback time. BEHOLD YOUR SO-CALLED DEMOCRACY, AMERICA.