I make fun of Curtis a lot, but it’s definitely a strip that I’ve come to like more over the course of doing this blog. Yes, it’s got a set stable of jokes that it trots out over and over; but some of them never get old, and one of them is the “Barry wets the bed” gag. You’ll notice that his whining, mewling response to Curtis’s jibe isn’t exactly dispelling the notion.

On another note, I have absolutely no idea what role Moses could be playing in the school’s Christmas play. Perhaps in a bid for inclusiveness, all major religious leaders will be portrayed at the birth of the baby Jesus, including Moses, Muhammad, Buddha, Ganesha, Bahá’u’lláh, and L. Ron Hubbard (who will be played by “Onion”). 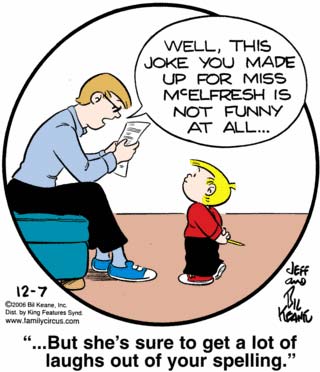 Anorexia is a serious condition with a host of psychological and physiological aspects, but it doesn’t provide an excuse for those pants.

You know, once-mediocre athletes who lose parts of limbs in tragic chainsaw accidents have a lot to teach us about sports — and about life. For instance, Bill Ritter has taught us that the best way to enjoy a Gil Thorp football game is with massive amounts of morphine running through your bloodstream. Milford may have lost the game, but Bill is a real champion!