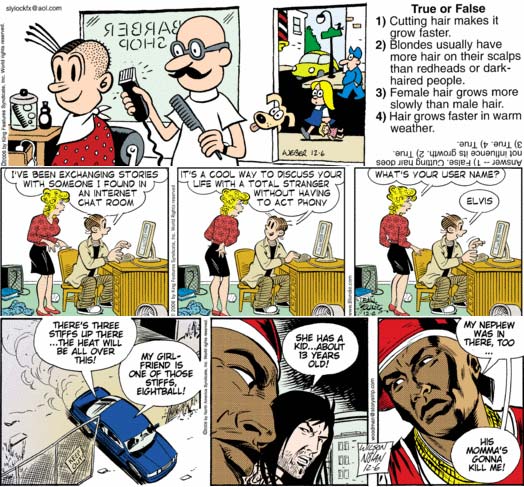 Ye cats, it’s a panoply of intertextuality in the funnies! Slylock Fox gets in on the Blondie 75th anniversary a year and a half late and simultaneously shows us all too vividly what Dagwood’s freakish, apple-shaped skull is really like; a little girl walks by and looks on with the appropriate degree of horror. Meanwhile, back at chez Bumstead, Alexander is living out his fantasies of being a tattooed, mulletted meth-dealing bad-ass. The real Elvis and his tough but still thoughtful and compassionate crime boss refuse to acknowledge this winking series of in-jokes, as befits the serious nature of this strip.

What does not befit the serious nature of this strip, however, is the name “Eightball.” Eightball. It’s the most hilarious thing that’s happened to me this week, and I shall savor it like a fine wine. I hope that, after Rex, June, and Abby the Wonderdog inevitably take the troubled and now orphaned Niki under their collective wing, Elvis and Eightball manage to escape the long arm of the law together and get their own spin-off strip, or, even better, a TV show on Fox. “He keeps a level head when things go bad … and knows how to get out when the getting’s good! He’s got a short fuse … and isn’t afraid to smack a kid in the face! Together, they’re … Elvis and Eightball!” They could put it on right after Prison Break.

When someone mashes together an e-mail address and a URL like this, you sort of get the impression that they’ve never actually seen a computer, but have had one described to them.

The Mr. Dent vs. Ella drama has ground on even more slowly than is typical for Mary Worth, but there’s always a payoff in this feature eventually. In this case, it arrives today, as we’re shown exactly what it would look like if Thomas Dewey were angered by a 92-year-old prostitute and paid her especially contemptuously.

Since nobody’s actually used one since 1998, I’m pretty sure that a plugger beeper is actually a beeper.