None of the soap opera strips can really be said to move quickly (except for the disorienting crank binge that is Gil Thorp), but those in the know know that nothing moves more slowly than Judge Parker. Today’s evidence: I’ve read every single Judge Parker for the last two years, and “Marie” is clearly supposed to be a recurring and beloved character, but I have no idea who the hell she is. Presumably she jetted off to visit with her bother for a long weekend about 72 hours ago in strip time.

The QLUNQ in today’s Dick Tracy has generated more comments and e-mails than any other comic sound effect in recent memory, most of which can be summed up as “What the hell kind of sound effect is QLUNQ?” Well, the largest denomination of U.S. currency in current circulation is the $100 bill, and there’s 50,000 bills in that suitcase, and 490 bills weigh one pound, so I’d say QLUNQ is the noise that 102 pounds of money and a suitcase make when they run into the side of a human skull. 102 pounds of money and a suitcase thrown one-armed, incidentally. And they say scientists are skinny, nerdy types! 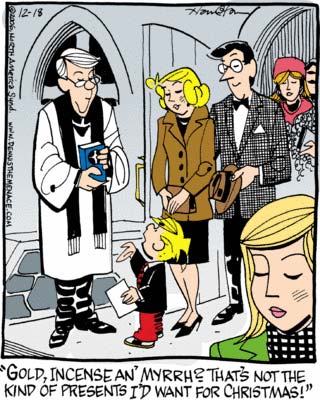 Well, Dennis has certainly left meancehood behind long ago, but we can take heart that at least he hasn’t gone so far in the other direction as to have become Christ-like.