Ah, Kwanzaa: What would our life be without you? We would be bereft, is what, since we wouldn’t be treated to the annual totally demented and awesome Kwanztravaganza in Curtis. I didn’t think anything could beat last year’s bat-winged Kwanzaa bear, but this enormous, huge-eyed, telepathic (and the good kind of telepathic, with the glowing rings of telepathy emerging from her brain) golden otter is breathtaking in its over-the-top Kwanztasticness. I was going to go back and read the earlier Curtises I missed during my vacation to see if I could figure out what the hell is going on here, but why bother? Just lie back and enjoy the huge golden otter’s telepathic glow. Ahhhh.

I did go back and read all the old Phantoms I missed, but I still have no idea what the hell this conversation is supposed to mean. Mostly I just like the sentence “We had it made with that securities job! Now we’re robbing natives!” I like to imagine it coming out of the mouth of one of the fratty Ivy League pricks I went to college with, one of the ones who was all eager to move to New York and get jobs working for Smith Barney or some such, but who one day found himself advancing on a village in Malawi with an AK-47 instead, wondering what had gone wrong with his life. 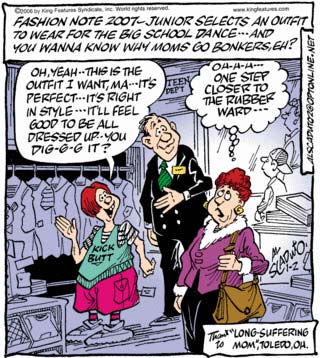 The haircut and the striped t-shirt are strongly evocative of Ronald McDonald, which can’t possibly be accidental. But I think what really sells this for me is the fact that the giant cargo shorts are magenta. Because that’s what they’re wearing on the streets. Word.

Look at that wistful little smile on Mark’s face in the last panel. Oh, if there’s ever a man who loves the thrill of the struggle with a clever, hard-working beaver, it’s Mark Trail. He’s going to live-trap the hell out of those rodents — but he respects them, is the important thing.

I wonder when Mark is going to tell Dick that he’s the one who set Lucky loose to wreak havoc on Dick’s land. Hint: the best time will be when Dick is unarmed.

I think there’s something wrong with me that this bothers me so much. But I’m still right, dammit.