Hi, everybody! I’m back at last. I see you’ve all been having fun in my absence (1270+ comments worth of fun!), but I’m rested and ready, if not tanned, and eager to get back in the blogging saddle.

So, how was your Christmas? Did it feel like it was brusquely shoehorned into someone else’s drama, as in Mary Worth?

Was everybody else busy and you had to get your holiday greetings from someone peripheral and random, Ã  la Abbey the Wonderdog in Rex Morgan, M.D.?

Or were you fobbed off on some generic winter scene that had nothing to do with anyone you know or have even heard of, as in Judge Parker?

Or, perhaps worst of all, did you have to spend the week staring into the dead, soulless eyes of your hideous square-headed family, as in Gil Thorp?

OH FOR THE LOVE OF CHRIST, MAKE THEM STOP STARING AT ME! AAAHHHHHH!

Ahem. Anyhoo, not a whole lot of great interest to report in the comics, as they mostly treaded water during a low-readership week. The most action took place among the foobs, most of which was easily predicted and won’t be rehashed here. There were a few bright spots, though. Mark Trail featured this happy, non-beaver-slaughtering scene: 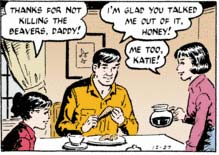 I don’t know what’s creepier: the chipper “Thanks for not killing the beavers!”, or the way daddy’s fondling that chicken leg.

Speaking of beavers, Barreto needs to get back to Judge Parker ASAP before Sophie turns into one permanently. 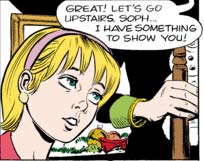 In non-beaver news, Mary Worth can pretend that she’s dreaming about her not-boyfriend, but thought balloons don’t lie: her main interest, as always, is herself. 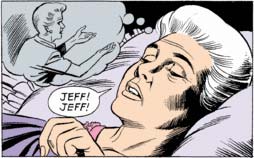 And in Milford, we learn that the aesthetic requirements for “favorite couple” are shockingly low.

And! You may have missed your chance to give the gift of Comics Curmudgeon gear for Christmas, but Valentine’s Day is coming up! What better way to say “I love you” than a shirt bearing the crazed rantings of a drunk? Faithful reader Genetic Mishap, who designed this logo, here re-enacts this classic scene: 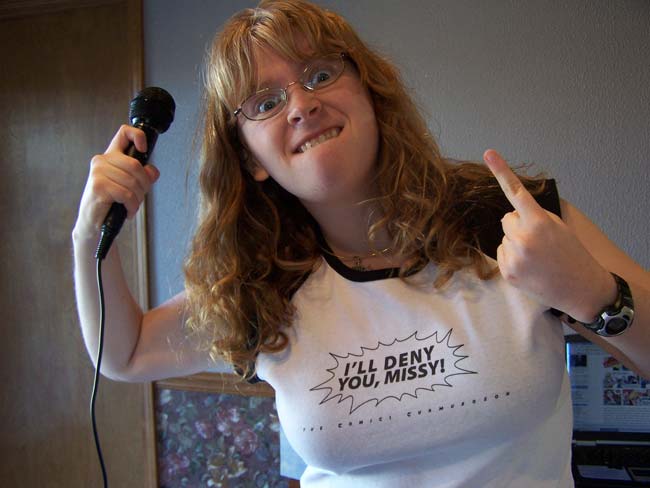 She also illustrates that the shirt also works when you’re not imitating comics characters: 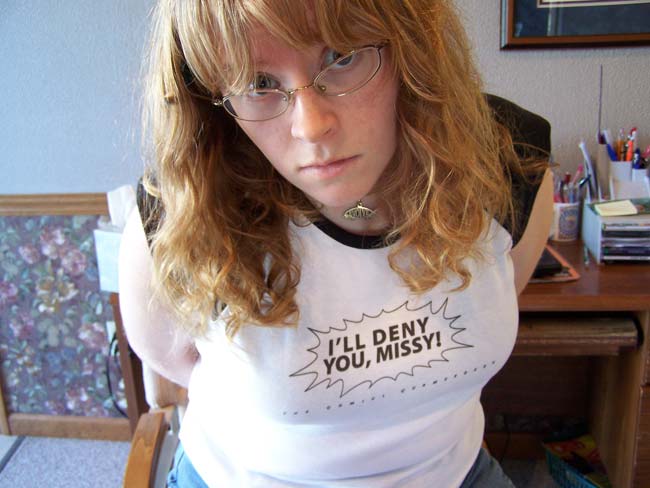 Operators are standing by, so buy yours today!

Finally, let’s get the new year off on a good foot with a tacky joke about cancer:

See, they totally set up a great Yul Brynner joke here and then completely failed to follow through with it.