I … I thought B.C. was funny today, kinda. It made me laugh.

I’m sorry. I’ll try to do better in the future.

So in between the “Randy Parker gay election smear” storyline and the “Abbey attempts to stop Neddy from going wild in Paris” storyline, Judge Parker’s been giving us little glimpses of this “Old biddy’s butler is sick so she hires a temp butler” storyline, which, I think, hooks up with the others because the old biddy is in Paris and is somehow a relative of Abbey and/or Neddy and will be the sexy twosome’s hostess in the City of Light. Anyway, I’ve been pretty amused by the whole idea of a butler temp agency — believe me, having worked on and off as an office temp to make extra cash while I was in grad school, standing stone-faced at attention awaiting the orders of some septuagenarian aristocrat would probably be more enjoyable than, say, calling a list of phone numbers to make sure they were still fax lines and hearing that horrible SCREEEEEEE every time — but my amusement ground to a halt when I saw the horrifying, soulless visage of “Mr. Hart” in panel three. At best, he’s a cybernetic automaton, impersonating a human for some mysterious purpose; at worst, he’s a demon from below hell, sent to reap the souls of all concerned. Plus, he’s Canadian, so: super scary.

Yeah, Niki, you did the “right thing” by calling June. That Elvis was probably going to take you for a “ride.” He’s one shady “character.” He probably … what? Oh, there’s someone here who wants to talk to you:

Margo! Do you kiss your comical immigrant mother with that mouth? I … I can’t control her, folks, I’m sorry. 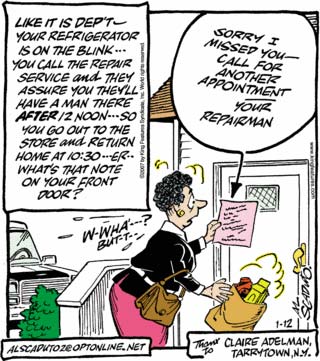 What it’s like to be me: I just spent ten minutes staring at this panel trying to figure out if this is the first ever black person in TDIET. Whatever the case, her butt is disproportionately and disturbingly large. 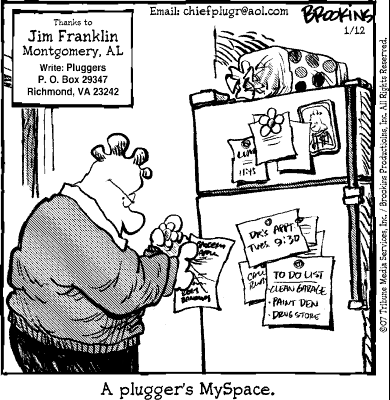