Here it is! The moment we’ve been waiting for since June! The moment when cheatin’ Paul is caught red-handed, Liz is emotionally devastated, worlds are shattered, great loves die, new ones begin! At last, it’s here! And it’s … it’s …

Bunch of people standing around in the cold. Fully clothed. Nicely drawn exhalation vapor clouds, I’ll give them that. Some awkward glances. Car in the driveway. And … such.

Plenty of exposition, though. Yes, sir.

God damn, this is boring. I hate you, foobs. Every time I lower my expectations to meet what I think’s coming, you go even lower.

Hey, but you know who never fails to meet my expectations? Margo Magee, that’s who. Whether she’s throwing aside her last shred of dignity to win the heart of a rich older man, or insulting her roommates with zingers just obscure enough to make them wonder if they’re actually being insulted, she always comes through in the clutch.

I have to imagine that Margo is the master tenant in Apartment 3-G. Otherwise, I have no idea why her collection of overpriced designer turtleneck sweaters and her ass haven’t been dumped on the curb by an aggrieved Lu Ann and Tommie years ago. 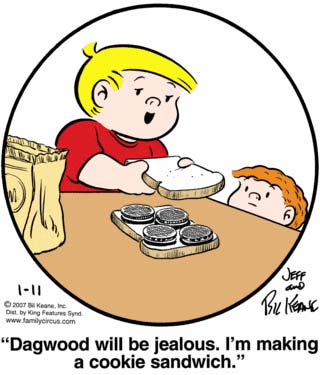 Several commentors have attempted to parse the dialogue here in relation to the phrase “cookie sandwich,” and how it applies to the relationship between Dagwood and his daughter, Cookie. It’s all very clever and naughty, but I think it misses the larger point, which is that Billy is making a lunch that consists entirely of Oreos and Wonder Bread. Clearly Mom has finally snapped and run off with the mailman, and Daddy’s passed out drunk (again), leaving the kids unsupervised and Billy in charge. The look on Jeffy’s face shows that he’s sort of dubious about this situation. Sure, cookie sandwiches are all well and good in the short term, but eventually they’ll run out of Oreos and/or Wonder Bread and who’s gonna buy more, huh? 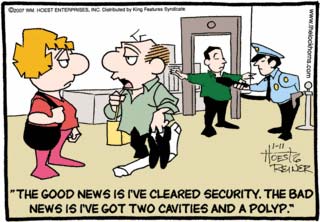 Leroy and Loretta have been locked in a vicious, evenly matched death struggle for decades, so if their negative energies were suddenly turned outwards, they’d leave a trail of dead and maimed in their wake. So look out, TSA goons! Your chastisement at the hands of Slylock Fox was just the beginning!