You know who I hope is at the door? Fun Tommie! Yes, the reason Tommie’s been so boring is that, due to a freakish space-time anomaly, she was split into “Dull Tommie” and “Fun Tommie,”
with the former being the one we’ve been watching all this time. As to where “Fun Tommie” went, she’s been boozing and screwing her way up and down Manhattan for most of the last three years, and is finally coming back to take a nap.

Sadly, it’s actually no doubt Gina at the door, come to say something rude and then flit off. Or a boring dark-haired white guy in a blue suit to sweep Tommie off her feet. YAAAAWWWWNNN.

I think the coloring gnomes are finally forcing the integration of the comics by any means necessary. First TDIET sees its first ever person of color, then suddenly Killer becomes black. We shall overcome!

So, as this freezing family trudges ever-deeper into this endless, inescapable forest, who are we betting on being the sole survivor of the inevitable descent into cannibalism? Dad would be the early favorite, since he’s the strongest and a nominal authority figure, but don’t count out Ruthie: she’s scrappy, has a low center of gravity, and is completely batshit insane. Joe — poor surly, none-too-bright Joe — doesn’t really stand a chance. 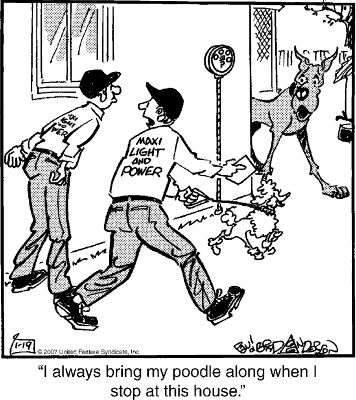 Wow. When Maxi Light and Power celebrates another profitable quarter at its next shareholders’ meeting, and they honor everyone who helped bring the company stock price up another six percent, I hope that, along with the CEO who broke the union and cut unnessecary expenditures on power plant safety equipment, this nameless poodle, who repeatedly and selflessly submitted to sexual slavery just so Maxi’s crack staff could read this damn meter, is singled out for public recognition.

“You’re know you are really a plugger?” Wow, and I thought this strip’s “Plugger’s/Pluggers” problem earlier this week was bad. Presumably this is meant to distract us from the “content” of this “joke”, which boils down to “You know you’re a plugger if you have a child when you’re relatively young and then live for another sixty years or so.”