Now hear this, Mark Trail: You bore me, y’hear? You bore me. These damn beavers just keep getting relocated and coming back and rebuilding their damn dam. From here on in, I refuse to comment on their shenanigans unless it includes laughably obscene dialog such as “Uh-oh, here comes your dad. He’s going to see the beaver!” or “The beavers are excited about being with each other“. Even strips like today’s, which has potential “shaved beaver” laughs, won’t make the cut because it doesn’t actually contain the line “There’s the beaver Doc shaved!” or the like.

And “Doc did that so he could treat the hurt place” just creeps me out.

Speaking of things that creep me out, I know that Dagwood has a life-destroying eating disorder and all, but you could not pay me enough to put my face anywhere near the terrifying clown-headed PA system in panel one. I am, however, kind of charmed by Clown Burger’s motto, “Say — then pay!” So much faster than paying first and then trying to figure out what to order that costs exactly the amount that you’ve already paid.

I’m going to ignore the socially important but lethally boring message of this strip to ask HOLY CRAP WHY IS MOMMA CURTIS WEARING A BLACK SHIRT MARKED WITH AN ENORMOUS RED BAR CODE? As if the giant symbol of soulless mechanization weren’t bad enough, the Satanic color scheme is soul-chilling. Apparently the Anti-Christ is active in the world of Curtis, and Mrs. Wilkins has agreed to follow him and wear his Mark. This might explain why she’s serving Curtis and Barry some kind of inky black brew, though why she’s serving it to them in bowler hats is still an open question. 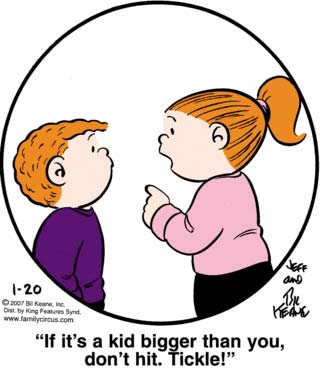 Wow, this is the worst advice on fighting dirty I’ve ever heard. It’s almost as if Dolly wants someone to beat the crap out of Jeffy. Hmm.