Leading cases are the very stuff of which the common law is made, and no leading case in the common law is better known than that of Regina v. Dudley and Stephens. It was decided in 1884 by a court in the Royal Courts of Justice in London. In it, two profoundly respectable seamen, Captain Tom Dudley and Mate Edwin Stephens, lately of the yacht Mignonette, were sentenced to death for the murder of their shipmate, Ordinary Seaman Richard Parker, after a bench of five judges had ruled that one must not kill one’s shipmates in order to eat them, however hungry one might be.

Fortunately for Slylock, who’s grinning a grin here that’s a little too sly, as a non-human animal his conduct is governed not by the common law, but by the Law of Nature. Max will make a tasty little snack to take the edge off until the raft washes up on the west coast of New Zealand, where our vulpine detective will use his powers of elementary deduction to solve long-running land disputes between the government and the Maori before dining on the native fauna, which is completely unadapted to mid-sized predators.

Also beyond the Queen’s justice in this vignette is that crafty bottle-stealing octopus. I will say again that Slylock Fox has some of the best incidental details of any strip out there.

So the Tracys seem to think that kicking a little cash at some Alzheimer’s researchers will somehow atone for the monstrous crime of erasing a man’s mind. Note, however, the “Inc.” in the address. That’s no high-minded government research lab, it’s a for-profit pharmaceutical firm — probably a shell company in which GlaxoSmithKline owns a controlling interest. Dick and Tess will no doubt be seeing a generous return from that generous thing she did.

Elsewhere, some dude plans to break into a jewelry store with a crowbar, in a totally interesting criminal act that will surely demand the attention of the world’s greatest, most techno-enabled detective. 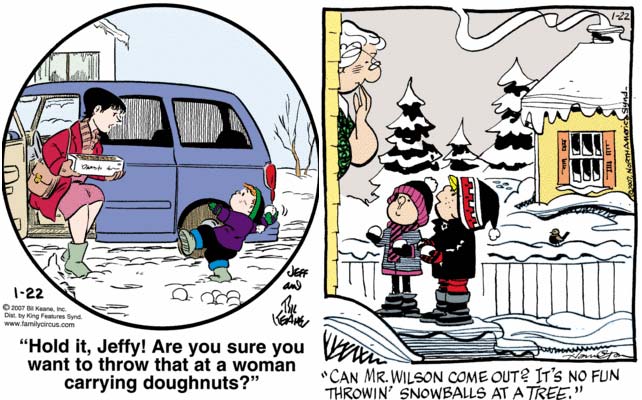 Jeffy’s blatant assault on his mother yesterday was apparently just the beginning; today, she must bribe him with food to stave off another barrage, a strategy that will last only until his little tummy is filled up. Meanwhile, the snowball offensive has spread to Dennis the Menace as well. Mrs. Wilson looks fairly shocked by Dennis’ naked aggression; no doubt years of sub-par menacing have lulled her into complacency.

If all the children in the comics pages rose up senselessly and violently against the adults, like the birds in The Birds, I for one would be a happy guy. I’m sure Elmo has a lot of aggression he needs to work out against Dagwood.

Lu Ann needs to make nice with her ghost, so she’s brought in … her incredible psychic microwave! Good lord, she’s even dumber than I thought.