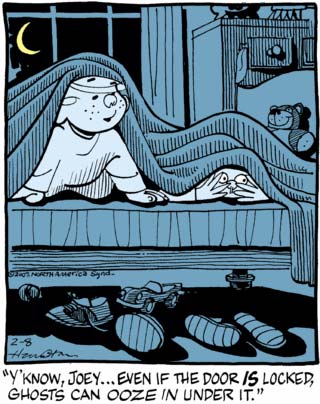 Well, OK, so it’s a little menacing to fill some little kid’s head full of tales of supernatural demons to the extent that his eyes are wide with mortal terror and (presumably) his bladder is emptying onto the sheets. However, the little kid is Joey, who is such a tremendous feeb that it isn’t even sporting to try to scar his psyche permanently. Dennis could have gotten the same results by saying, “Look, under the bed! Shoes!” Or just making a loud noise.

“No, I came halfway around the world to drag you back to the stultifying suburban existence that you’ve tried so hard to escape! If it’s good enough for me, it’s good enough for you! The fact that I got to insult a third-world doctor and condemn dozens of children to a lifetime of suffering in the process — well, that’s just a bonus!”

Seriously, Mary Worth is an awful, awful human being. If Jeff manages to muster his last reserves of strength, sit up, and bite off the tip of Mary’s pointing finger, he will forever be my hero. 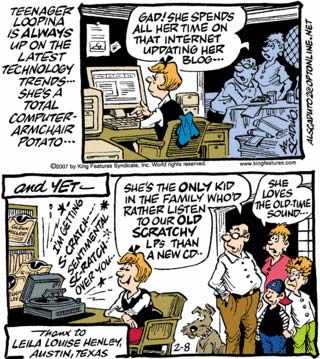 Today’s TDIET shocked and horrified me — not for the usual reasons, but because Loopina is actually a type recognizable to modern, vaguely with-it people. Surely we all know that young contrarian hipster — probably not a teenager, but certainly under the age of 35, which, for the typical TDIET reader, amounts to the same thing — who’s all techno-enabled and blog-happy and whatnot but when it comes to music will wax rhapsodic about the warmer sound you get from LPs. Heck, he or she may very well have a blog that focuses on that very subject. It’s a good thing that this panel includes characters dressed like they’re from some bizarre alternate-universe 1950s and the delightfully weird phrase “computer-armchair potato” or my head might have exploded.

Update: Well, obviously the reason this TDIET depicts life after the end of the Truman administration is that “Leila Louise Henly” is none other than faithful reader Non-Shannon (you might remember her from the picture that accompanied this post). Congrats, Non-Shannon. I like the bow in your hair, but I’m frankly shocked that you weren’t depicted as listening to a Victrola.

Hmm, I may have to rethink my heroin theory. The only way you make tropical-island-retirement money in a national forest is through shady logging deals. If we get to see Mark punch out Secretary of the Interior Dirk Kempthorne at the end of all this, I will be a happy guy.