Who among us — particularly, who among those of us who have had the misfortune to read his loathsome monthly letters — hasn’t wanted to say “*#@[star][Saturn]!!” to Michael Patterson? At last Grandpa Jim, who certainly didn’t leave his farm to stoically fight the Nazis just so his whiny ingrate of grandson could make mad bank with a book about an innocent Irish girl and the stoic Canadian who left his farm to fight the Nazis who abused her, says what everyone else is feeling. My only concern is that the final thought balloon undermines the joy at seeing the eldest Patterspawn obscenely insulted, that maybe Jim thought he was saying “Good for you, m’boy! I always knew you’d make it!” instead of “*#@[star][Saturn]!!”. However, I choose to believe that he’s wondering about the construction of the book because he’s hoping, once next fall comes around and his strength has returned, that he can beat Michael to death with it. *#@[star][Saturn]!! you, Michael.

“Because once the two of them die of pneumonia, I’m another step closer to 100 percent of the inheritance. Then all I have to do is rig Chip’s guitar to electrocute him, and … MOO HA HA!”

Rex Morgan, M.D., is trying to worm its way back into my affections with the whole “June throws herself at a thirteen-year-old boy” gambit again; I have to admit that it’s kind of working. I’m interested to see what strategy she uses to distract Niki from his simmering class resentment. “No, it’s not really so big … uh-oh, I just splashed water all over my white t-shirt!” You don’t want to know what the carrot is for.

Wait, Mark Trail was in the army? Maybe his obsessive love of nature is some kind of attempt to make up for the massive Agent Orange deforestation program he ran back in ‘Nam. He does seem to have received extensive training in righteous-fist-to-face combat.

I am a little unnerved by Mark’s shit-eating grin in panel two. It’s too easy to assume that Mark and Dan were all not asking and not telling when they were in the service, and anyway, it’s well known that Mark finds sex with anyone to be abhorrent. I’m guessing Dan was Mark’s connection to sweet, sweet heroin. The reason Mark so angrily beats up drug dealers on his turf nowadays is that none of them offer product as satisfying as the horse he got back when he was in the army, and Mark demands high-quality goods, dammit. 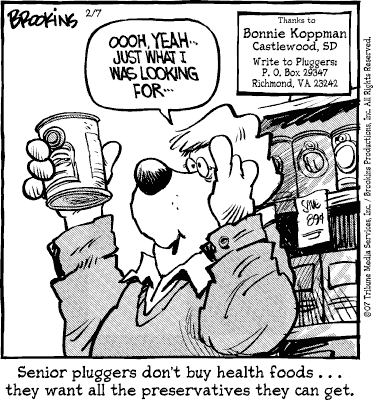 When it comes to food science, gerontology, and/or chemistry, pluggers are terribly misinformed.