Do you know what really offends me about this Pluggers? It’s not that it puts me, as someone who still gets his televised entertainment over the air, into the ranks of pluggerdom; I can deal with that. (And by the way, I haven’t purchased a new set of rabbit ears in more than ten years, so I’ve out-pluggered Mr. Bald Dog Plugger Man! Ha!)

No, it’s that this panel doesn’t contain the patented Pluggers play on words or little twist. It’s the one thing Pluggers does, and here it is refusing to do it. “You’re a plugger if you seek to purchase rarely used but still useful electronic equipment”? That’s crap. Here, this is what it should have been: “Pluggers wish on their lucky rabbit ears that they’ll get good signal for the big game,” with a drawing of the Rhino-Man wearing his team’s jersey and adjusting his TV antenna. DON’T MAKE ME DO YOUR JOB FOR YOU, PLUGGERS!

It’s possible that Katy is getting chemo treatments and we’re about to get a Very Special Apartment 3-G Storyline. It’s also possible that this is the artist’s idea of a hip-looking young woman. It’s not possible that anyone in Katy’s age range (which I put at somewhere between 15 and 40) would allow her uncle to plan her birthday party for her, nor is it possible that she would utter the phrase “Oh, cool! You’re the event planner!” 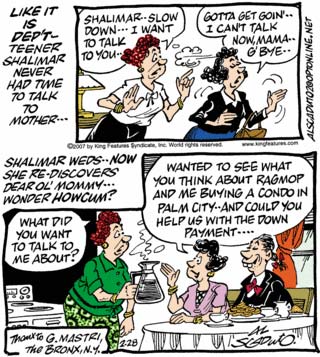 As usual, there’s enough material to analyze in this TDIET to fill out a good-sized Ph.D. thesis, but I’ll satisfy myself with the following:

By the way, those of you who enjoy TDIET but don’t regularly read Ruben Bolling’s Tom the Dancing Bug should check out today’s installment. You’ll have to sit through an ad to get to the cartoon if you aren’t a Salon.com subscriber, but it’s worth it.

I’m not sure what’s more hideous: Mary’s aqua/urine-colored ensemble, or the pug-faced little child at the bottom left of the first panel.

So, remember that Funky Winkerbean from last week where it looked like Wally got blown up (but really he didn’t)? Well, apparently it offended somebody (no, really). And yet the blatant phallic banana in this Slylock Fox will in all likelihood not draw a single letter to the editor anywhere in the country.