Wow, so Slylock Fox is keeping with its overall mystery theme, but seems to have moved from cutesy Encyclopedia Brown-type mysteries to late night Cinemax “erotic thriller”-type mysteries. This shift can probably be attributed to the hiring of the sexy Cassandra Cat, who featured in a previous disturbingly adult installment of the feature. What really ups the squik factor me, honestly, is not merely Cassandra’s bound state, or even the fact that she really was tied up by a “friend”; no, it’s Slylock and Max’s creepy, expressionless, voyeuristic stares. You sort of get the feeling that they’ve been halfway into that window for a while now.

By the way, I didn’t even notice the goldfish, thrashing around on the floor as it dies slowly, until I read the solution to the puzzle. So thanks for making me contemplate that little horror in the midst of this perversion, Mr. Omniscient Upside-Down Slylock Fox Narrator.

I’m not sure what Herb’s expression in the final panel is supposed to indicate: that he’s reveling in squinty-eyed glee at his own lame internal joke, or that he’s taking a dump in his pants. Frankly, both scenarios would provide him with roughly equal amounts of dignity. 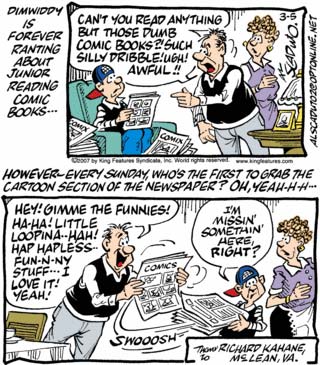 I don’t really have a ton to say about today’s TDIET, except that “Richard Kahane” is none other than faithful reader and occasional commentor Obélix, who scores points for actually making his entry comics-related. Comics Curmudgeon readers have now supplied four or five TDIETs over the past year or so, which may say something about what percentage of this feature’s readership we make up.