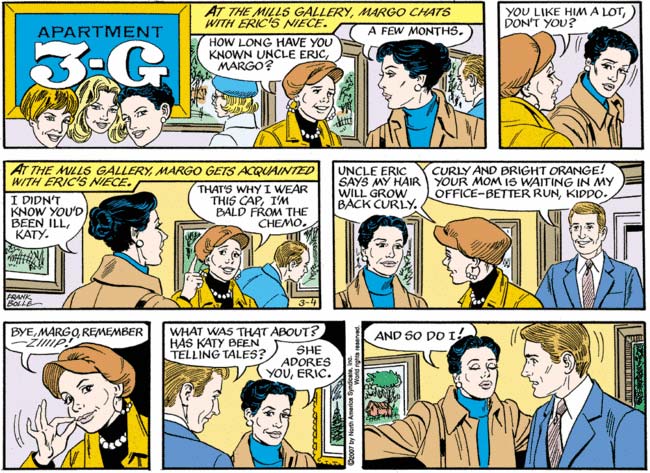 The final panel of Sunday’s Apartment 3-G — in which Margo, unfamiliar with normal human methods of showing emotion, does her best to illustrate adoration with closed eyes and pouty lips, while Eric recoils in disgust — is pretty much the best thing ever. It’s enough to almost make me ignore Katy’s blatant bit of pantomimed drug innuendo in the fifth panel. We’ll soon find that Eric is only capable of showing real tenderness to his blood relatives; he only chose Margo as a sexual partner because of her steely invulnerability to typical weaknesses like “feelings”, and thus he’s about to drop her like a hot potato. 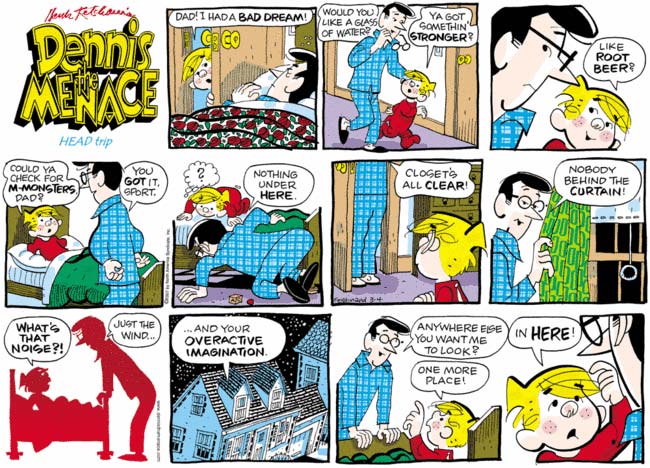 Dennis’ level of menacing has hit a new low. By right, Dennis ought to be causing nightmares with malice aforethought, not suffering from them. But the last panel offers a clue to the lack of Menace: Dennis has clearly undergone some traumatic, Clockwork Orange-style de-menacing process. (The strip title in the first panel indicates that the techniques may have been derived from the CIA’s LSD-based mind control experiments from the 1960s.) Dennis knows that some essential bit of his soul has been killed, and he begs his father to reverse the procedure, or, failing that, to crack his skull open and be done with it. 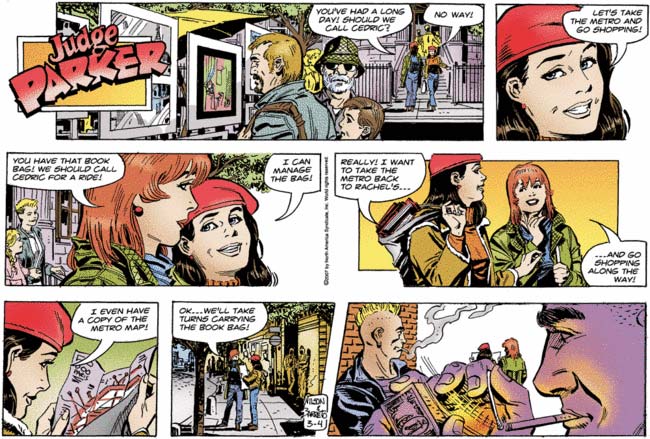 Ah, wealthy suburban Americans, your wealthy suburban Americanism is showing! “Oh dear, my teenage daughter has a bag with several books in it; she can’t possibly take public transportation! I’ll call the butler, post-haste! This trip is totally helping her learn about life on her own.” Of course, like most of the 3.6 million people who choose to ride the Paris Metro every day rather than call for their manservant to come with the Bentley, Neddy and Abbey will inevitably be assaulted by punk rockers.

Incidentally, Neddy, they have these things called “backpacks” now that allow you to carry books more comfortably than that … whatever it is you have slung over your shoulder. Backpacks are even for sale in backwards, retail-starved cities like Paris.

The throwaway panels in Sunday’s Shoe brought me up short. Is that the bird version of Andy Warhol the Perfesser is talking to? So, if Andy Warhol were still alive today, he’d be doing public service announcements about the importance of staying in school? And he’d be a bird?

Also, this panel from Sunday’s Mark Trail was a little marvel of cruelty:

“Hey, kids! Did you know that the beach is covered with corpses? Rotting corpses?”