You may have missed Friday’s thrilling Spider-Man, in which the fake Mrs. Spider-Man attempted to escape from the back seat of her captor’s car! So, thrill to this installment in which … she … is … put back into the car by her captor. This, combined with my rage earlier this week at similar non-developments, has brought about an epiphany: just about everything that happens in Spider-Man happens only to slow down the action of the strip. It’s all an endless delaying action, making the big payoff we’re going to get that much more exciting. I’ve been reading this feature daily for something like three years now, so I can tell you that said payoff had better be really good.

Panel three: Spidey, you got clocked by a brick and you’re just now wondering if this whole “spider-sense” thing isn’t a load of bunk? 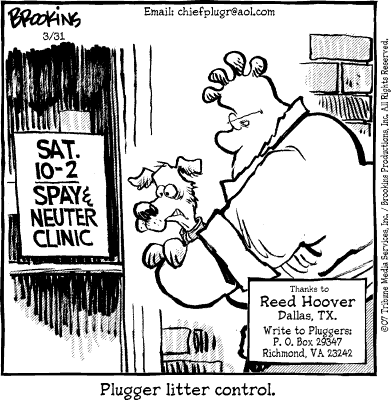 Just when you think that the whole “anthropomorphic and non-anthropomorphic animals uneasily sharing narrative space” scenario can’t get any more unsettling, you get today’s paean to involuntary sterilization. For obvious reasons, I try not to pay too close attention to the various family relationships among the horrifying bipedal beasts of Pluggers, so I can’t say for sure if the dog and the Chicken-Lady are kin or just acquaintances, but I think what really makes this panel disturbing is the look of mortal terror on the face of the li’l pup contrasted with heavy-lidded indifference of his feathered captor.

Would it make me an evil chardonnay-swilling elitist if I suggested that actual plugger litter control is a crude, hand-scrawled sign that reads “FREE PUPPIES,” which you put on a pole in the middle of your dog-feces-laden yard? What, it would? Oh, OK then, I won’t … what, I already said it? Damn it.

Wow, who knew that painting your own porch furniture was something that somehow lowered one’s prestige, and that, more generally, the elite of our military’s officer corps lives in a fishbowl in which every action that they and their spouses take is judged by neighbors and passersby? Who should be painting a general’s chairs? A crew of enemy combatants, on loan from Gitmo? 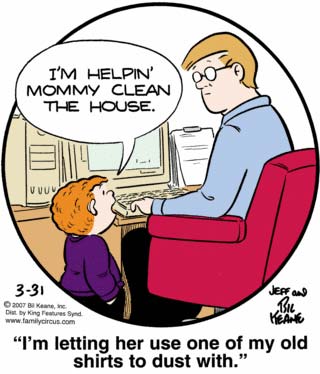