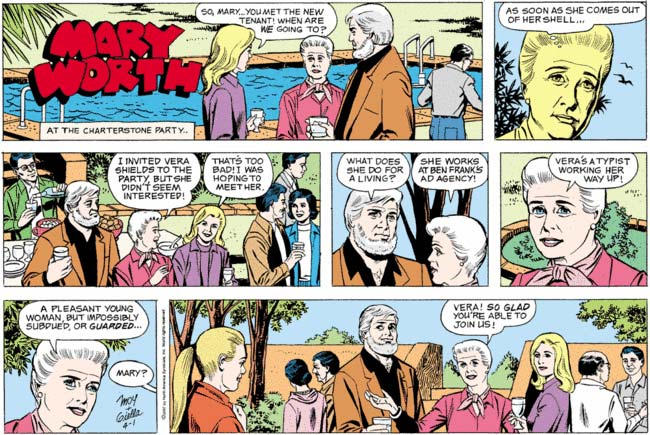 Ah, a Charterstone pool party! Always a nexus of pettiness and backhanded sniping, and always an excellent opportunity for Professor Chinbeard to make an ass out of himself. Usually he achieves this goal by insulting people behind their backs or attacking those who dare to show an ounce of compassion for others, but he’s more than happy to blatantly ogle the troubled, mousy new girl in front of his wife if that’s what it takes. It’s a good thing he wore his sexiest rust-colored leisure suit and inky black shirt for the occasion!

It’s hard to know what’s going on in Vera’s head, since she’s so impossibly subdued and guarded, but I’m guessing it’s something like, “Yep, this is exactly what I was afraid this scene was going to be like.” 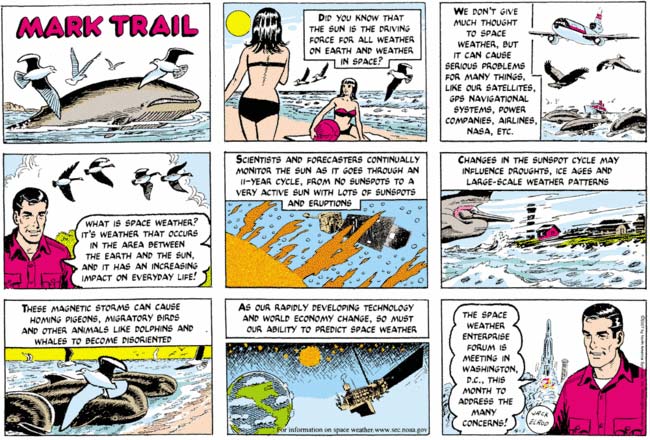 Meanwhile, Mark Trail is either very, very high, or about four years old. This is the only explanation I can offer for what we see here today. “Did you know … SUNSPOTS! They make … pretty girls in bikinis … and planes and dolphins and whales OUT OF CONTROL! And then the pelican made a big hurricane … WHOOOSH. That’s why we built this huge crystal rocket ship in Washington, D.C.! WE’RE GOING TO THE SUN TO FIGHT THE SUNSPOTS! HOORAY!” 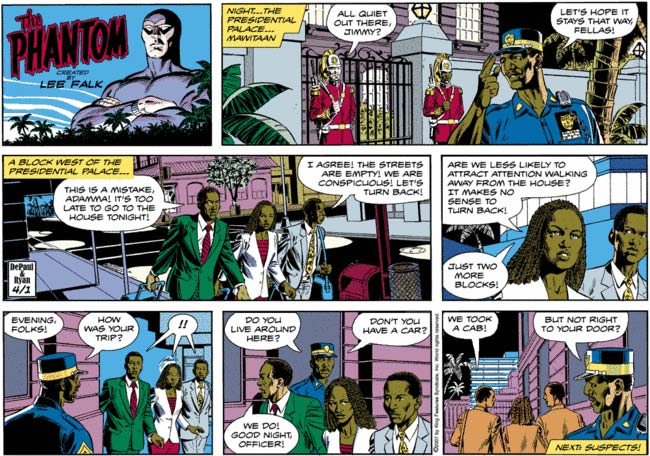 Hmm, it looks like “DePaul & Ryan,” who’ve been drawing the daily Phantom for a while now, have taken over the Sunday duties from Graham Nolan. It’s too bad, as I’ve been a fan of Nolan’s work in this setting, but now he’ll have more energy to lavish on June Morgan’s breasts (he’s the RMMD artist too). Anyway, today’s new adventure belies the notion that Bangalla is a happy, healthy post-colonial democracy. People walking with a suitcase at night, in the same neighborhood as the presidential palace? They must be … suspects! Some quality time down at the police station with a rubber hose will loosen their tongues and establish exactly why we should be suspicious of them!

Also today, a couple of throwaway panels of note:

If you looked at this in your paper today and recoiled in horror but then consoled yourself by saying, “Well, at least nobody recorded this and then uploaded the MP3 to the official FBOFW site,” then I’m about to shatter your world of complacency into countless shards of anguish (note: don’t click this link unless you want to explain to anyone within earshot why you’re listening to FBOFW-themed “rock” music).

It may not be menacing as such, but it’s at least a little disturbing to see Joey and Dennis contemplate the tempting target that is Mr. Wilson’s enormous ass.