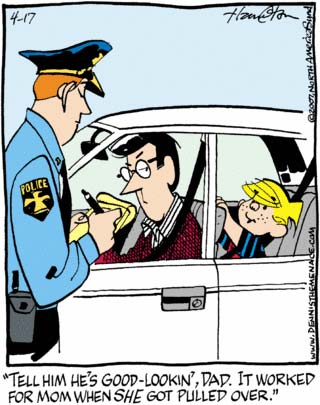 It’s easy to feel like you don’t make a difference in this cruel world, but every once in a while you realize that concentrated effort can effect change. For instance, lately I think I’ve detected a modest but measurable uptick in menacing on the part of Dennis Mitchell, and I’m more than willing to credit that to the hectoring from this site. Today’s installment is particularly delicious, as Dennis manages to emasculate his father on two levels: by revealing to a third party that his wife openly flirts with other men, and by suggesting that he make a pass at this strappling officer of the law. The look of barely internalized rage on Henry’s face might suggest savage beatings down the road, but the Mitchells are a civilized clan: presumably some act of psychological warfare will be perpetrated against his son instead.

Speaking of savage beatings, I can’t wait to see the epic fisticuffs that will soon break out in this dingy hotel room, reducing the cheap furniture to so much kindling. In the second panel, the reason for Mark’s tie becomes obvious: for a brief moment, Dan has mistaken Mark for a Mormon missionary, and that instant of confusion gives our hero the opening he needs to force his way in and get all shouty shouty.

I have a great memory for useless trivia, and it’s both a blessing and a curse. For instance, most of you have probably long forgotten that more than six months ago Margo casually mentioned that she had an assistant, but I’ve been on tenterhooks to find out who this person was, or if the very existence of such an individual was just a figment of Margo’s bravado and need to look important and/or imagination. Today, we learn that she’s hired an attractive, younger fellow, naturally, though his unnaturally wide hair part and taste in powder blue polo shirts are unfortunate. While it’s impossible to say for sure, we can reasonably assume that he harbors lustful feelings in his heart for his boss, which her frequent outbursts of unreasonable rage only intensify.

By the way, Margo, I don’t mean to speak out of turn, but you were, strictly speaking, hired to, um, help. Don’t be mad at me.

Oh, so he’s a preternaturally helpful old black man with a colorful nickname! Nice. I bet he has some real life lessons to impart to these young white people. Yup.

To be fair, if my name were “Otha,” I’d go by a nickname too. The fact that he likes to be called “Clambake” may indicate that his real agenda is to protect the Milford baseball team from Scientology.