It’s official: Everyone in this strip is a screw-up. “When Kordak hits ’em, they’re done for”? Tell that to not-dead hideously ugly redheaded flattop dude! Even the corpse-dumping was marked by failure. Presumably now N-DHURFD will seek to help Spidey in order to have revenge upon his former criminal compatriots. Inevitably, he’ll botch it somehow. 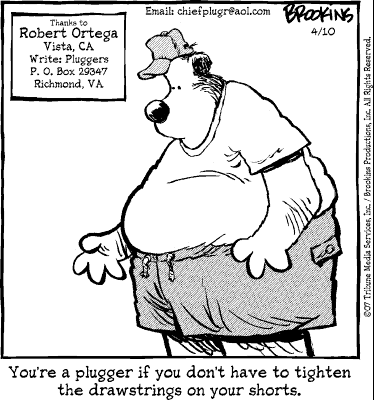 So … you’re a plugger if you’re fat? This not only represents some kind of creative nadir for the Pluggers franchise, but it insults millions of fat people everywhere. Maybe the fatness/drawstring shorts combination is the key here.

Wow, that angry, angry fish in panel two is the scariest thing I’ve seen in the comics — or, well, anywhere, really — in a long time. Maybe it represents Mark himself, infuriated at being used and determined to settle the score with his gaping, lipless mouth. “You want to pretend to be dead to make money, Dan? Oh, I’ll pretend for you to be dead, all right — ONLY IT WON’T BE PRETEND!”

UPDATE: Anyone who thinks panel two is mere fantastical whimsy needs to read this. 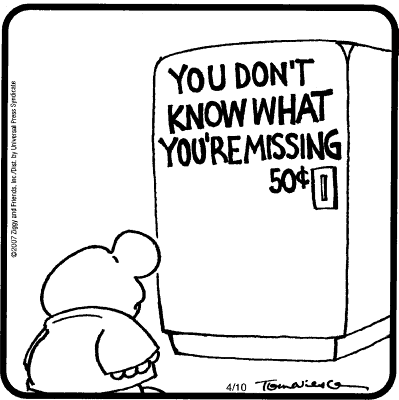 I have to say that I find the fact that this vending machine/enigmatic monolith has a coin slot but no way to spit out whatever it is you don’t know what you’re missing profoundly unsettling. I know that the “cryptically labeled vending machine that Ziggy regards dubiously” is a common trope in Ziggy, and for obvious reasons I’m not going to subject myself to a hunt through the Ziggy archives to find out if they’re all like that, but the sight of that smooth, unbroken expanse of white whatever, unbroken by any dispensing door or slot of any kind, chills me to the bone.