Panel one: The touch on the shoulder, plus the nature of the conversation, establishes that these two gentlemen are well acquainted with each other, and, despite minor conflicts, keep each other’s best interests at heart.

Panel two: An exaggerated look at the watch, plus a call to make plans later, indicates that one of the two characters needs to run.

Panel three: Oh no! Readers might not realize that these two are old friends, and about to part! We need a narration box, stat! As a bonus, it will screw up the rhythm of the strip, implying that there’s been some kind of gap in time between panels two and three!

I’m uninterested in the latest example of J. Jonah Creep’s epic self-absorption, and my curiosity is only vaguely piqued by the flight of that … brick? videotape? bundle of hundred-dollar bills? Whatever. I am, however, intrigued by the concept of a thought balloon coming from off-panel. A similarly positioned word balloon offers a comics-panel approximation of a situation in which you can hear someone but not see them; this seems to show that SOMEWHERE nearby, SOMEONE is thinking … but WHO?

When I read today’s Gil Thorp, my eyes slid right over the bizarre wildlife analogies and traumatizing Paris Hilton joke to settle on that … thing … that the first basewoman is holding in the third panel. Is it a trash can lid? An enormous pair of black panties with a frilly trim? A rip in the fabric of space and time, revealing the soul-destroying black abyss that lies beyond our universe? After about a minute, I realized that we’re just supposed to be looking directly into the maw of a fielder’s mitt. That’s a minute I’ll never have back, and I resent it.

By the way, it appears that Hadley Baxendale and Steve Luhm fought for equal rights in vain: While I’m sure the baseball diamond has been mowed with laser-beam precision, the softball field appears to be covered in ankle-deep grass. The right fielder is standing in a particularly wooly patch, though, if we continue with the African herbivore metaphors, she may believe that it provides camouflage from predators.

It’s hard to believe, but I’ve managed to avoid commenting on Dick Tracy ever since we met the completely demented Queen of Diamonds character. Today, things just get weirder as she discards her costume for reasons that are no more obvious than those that drove her to wear in the first place. It’s not like a lumpy person in a skin-tight black bodysuit with a face like a playing card is exactly inconspicuous, even if she isn’t carrying a supernaturally glowing gem.

For those of you not following along at home, Neddy and Abbey, fleeing from their ‘80s punker attackers, have ducked through a door off of an alley and into some mysterious workshop full of industrial supplies that they can turn into weapons. Presumably they will blow-torch their nemeses into submission, then dump their charred figures onto the steps of L’Académie française, where they will be dealt with for their crimes against French grammar. It looks like somebody’s gunning to have their strip turned into the next ultraviolent Robert Rodriguez-directed big screen comics adaptation.

Many of you have already noted that Mark is flying to confront Dan’s grieving widow on the back of a majestic goose, and driving from the gooseport in some kind of vehicle that lacks seats. I’m more disturbed by how excited Cherry is about the whole thing. “Oh, Mark, I’m so glad you didn’t call the police with your suspicions. I love it when you go off half-cocked on impromptu voyages of vengeance! Go get ’em, tiger! Don’t beat anyone to death unless you feel like it!” 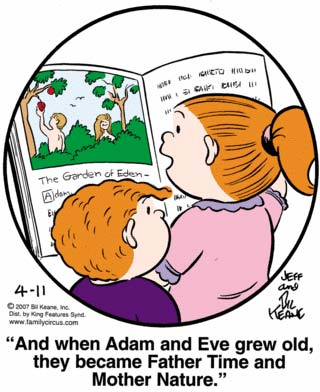 This, combined with this, leads me to believe that the Family Circus has a bee up its butt over recent findings that most Americans, including most of those who consider themselves Christians, are completely ignorant of the basics of the Bible and Christian theology. Obviously it will climax with an angry, melon-headed mob demanding that public schools bring back religious instructions for their poor, hell-bound students. Obviously their parents can’t be trusted to do it! They’re just as dumb!