Also, check out that faraway look in his eyes as he waves his hand around at nobody in particular in panel two. I know we think of him as being uptight, but he is a liberal arts professor at a groovy California state university who wears “nonconformist” facial hair and likes to bust out the burnt sienna leisure suit and get down on occasion. He’s almost certainly chemically altered right now. They can’t show it in the comics, but I’m pretty sure that throughout this whole pool party sequence, the Charterstone communal bong has been just off-camera as it gets passed around. Maybe that’s why Vera took off so quickly: over in Pacific Cliffs, that millionaire’s stomping ground where she grew up, the mind-altering substances came in little bottles and were prescribed by your private physician, and she looks down on this bourgeois tokery.

I can’t even begin to tell you how happy I am that Cassandra Cat seems to now be a recurring character in Slylock Fox’s rogue gallery. You’ll note that she’s dyed her hair blonde since her last appearance in the strip, all the better to use her feminine wiles to slink out of a shoplifting conviction. Max Mouse is clearly besotted with a representative of the species that should by Cartoon Law be his greatest nemesis, which confirms once and for all that he’s an S&M submissive.

By the way, we also would have accepted “Because polygraphy is pseudoscience perpetrated by quacks, and Slylock’s half-assed guesses, based on equal parts induction and species prejudice, are just as likely to be accurate” as a correct solution to the puzzle. 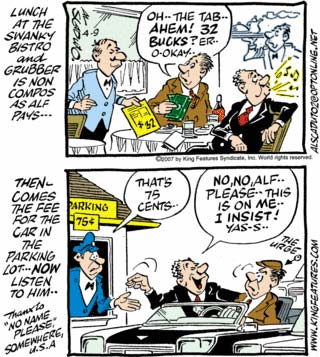 Careful TDIET readers (which category I trust includes ALL OF YOU) know that each daily panel, while a unique and brilliant masterpiece in and of itself, is often built out of a number of recurring elements and formulae, just like the epithets and set phrases that the ancient bards used to create the Homeric poems. I first encountered “the urge” in one of the very first TDIETs I commented on. Generally, the urge impels the urged to visit some horrible act of violence — usually something along the lines of skinning alive or burning to death — upon the perpetrator of whatever minor transgression is the subject of that day’s installment. Today, the urge is left unspecified: Alf is merely subject to it, and we are left to wonder just what variation upon it is rolling around his be-Kangoled head. It’s all no doubt baffling to the casual reader, but a nice treat for the true TDIET fan. 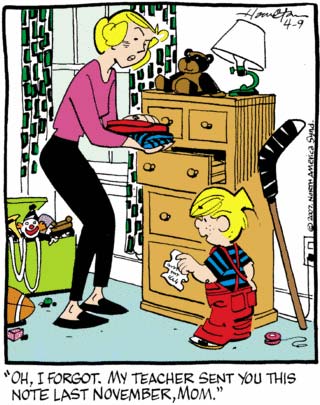 You know, as a comics reader, you sort of accept that your iconic characters are going to sport the same outfit day after day: Charlie Brown will always wear that yellow t-shirt with the raggedy black stripe, Dagwood Bumstead will always wear a tuxedo with a single dinner-plate-sized button in the middle of his chest, and Donald Duck will always wear the top half of a sailor suit, but, disturbingly, no pants or underwear. But scenes like this — where Dennis is wearing his typical red overalls and blue-and-black-striped shirt, and his mom is putting another instance of the same outfit, neatly folded, into a drawer that’s presumably full of them — make it harder to suspend your disbelief. Either Dennis has a serious undiagnosed case of OCD, or the Mitchells are very, very cheap and managed to get a deal in some kind of bulk sale on factory seconds.

Once they quit the menial jobs that they hate, pluggers have very little reason to go anywhere or see anyone. Sometimes they just stay in bed for days.

Actually, sleeping in until noon is one of my very favorite things in the world, so, as a non-plugger, it’s disheartening to learn that I’ll be continuing to set an alarm even after I retire. I wonder what it is I’ll be doing so early in the morning? Having brunch with homosexuals where we drink mimosas and plot to undermine our commander-in-chief, no doubt.

By the way, apropos of nothing, I was checking out the Google search terms that brought people to my site today and discovered “make your boyfriend feel better when his dog dies” among them, and it really touched me. Nice lady (or perhaps fellow): just the fact that you’re trying will go a long way, honest.