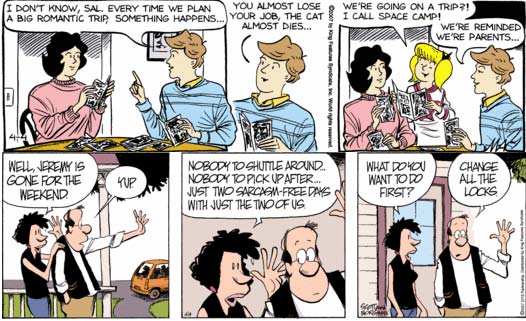 Man, I guess the liberal media really is determined to undermine the traditional American family. First, Disney insists on churning out movie after movie featuring single parents, and now Sally and Ted and Connie and Walt have dropped any pretense of wanting to spend time with their offspring. The Duncans have at least waited until their son was legal to work in some dead-end job before abandoning him to his fate; the Forths apparently don’t care whether Hilary forth ends up as a child prostitute or in some kind of Dickensian pickpocket ring, as long as they’re left alone to screw.

Typically, Gil Thorp storylines come to a screeching halt as soon as each team is eliminated in the playdowns. (Can anyone remember the last time that any Mudlark team actually won a championship? That’s the sort of hard-hitting question Marty Moon would ask Coach Thorp if he weren’t so drunk.) After each season ends in shame and defeat, a new one begins, full of hope and new difficult-to-follow drama. That’s why I’m so pleased to see that the lady jocks of Milford are moving from basketball to softball and still buzzing over l’affaire autoclub, as the French punks in Judge Parker would say. I’m dying to know exactly what it is that Tyler is going to say to the softball team that’s going to get Brynna Antenna back into their good graces. I hope that he stands there in the outfield for a minute while they all stare at him, then clubs himself in the back of the head a few times and runs off.

On the self-clubbing tip (ew), why haven’t more of you entered the Self-Clubbing Tyler lookalike contest? I mean, how hard is it to look like this?

Well, actually, it’s really quite hard, but the lure of fortune and glory should overcome that. I’ve gotten a few entries so far — and to be frank they’re all quite strong — but nowhere near the numbers we saw for the Finger-Quotin’ Margo contest. So send in those pictures, damn it!

I really have no desire whatsoever to wade into the twisted swamp of teenage gender politics here. Really. None. Whatsoever. But I did want to feature this strip because it contains my new hero. I speak, of course, of the dude at the far right in panel two, the one with the gap in his teeth and the eyes the size of dinner plates who’s saying “Hoooo!” I shall call him “Gap-Toothed Starey ‘Hoooo!’ Guy.” It’s clear that he needs to be brought front and center in this feature right away, and possibly given his own spinoff strip. What makes Gap-Toothed Starey “Hoooo!” Guy tick? What’s his home life like? What, other than risque gossip with his buds, makes him say “Hoooo!”? Will he be going to university? Now I can’t wait until next month’s letters are up on the Foob site on May 1; I’m really looking forward to his missive, which will be entitled “Hoooo!”

Man, right up until that last panel, I was convince that the Archie-Joke-Generating-Laugh-Unit 3000 had discovered absurdist whimsy. Replace Archie and his dad with Griffy and Zippy and it would make a great deal of sense. Sadly, it all gets very bourgeois in the last panel.

Archie himself has never looked more like a baffled and angry lowland gorilla than he does in panel two.

Ignoring the ostensible joke of this strip (remarkably easy to do, since it doesn’t make a lick of sense), I have to say that there’s something unspeakably creepy about the way that all of the assembled soldiery at the ostensible celebration in the second panel is completely lacking in any indication of joy or excitement or any other normal human emotion. The affectless Beetle handing a balloon solemnly to General Halftrack is just the icing on the cake. If you told me that all of these people were about to unholster their sidearms, blast their commanding officer to bits as he stands on his makeshift podium, and then walk away in silence, I honestly wouldn’t be a bit surprised.