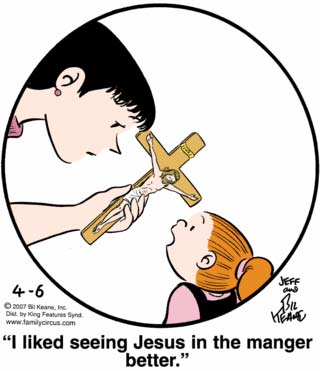 I’m not a Christian, but even I know how theologically troubling this Good Friday installment of the supposedly Jesus-friendly Family Circus is. Hey Dolly, they don’t say “Jesus was an adorable baby wrapped in swaddling clothes surrounded by cute animals for your sins,” you know what I’m saying?

Several commentors have suggested that Ma Keane is attempting to exorcize the demons out of Dolly, but I think it’s instructive to compare this panel with Tuesday’s installment. The visual echoes imply that Dolly is about to get smacked with that crucifix; we might assume that its religious meaning is incidental, and that it was merely the closest heavy object to hand.

The first panel of today’s Gil Thorp is just evidence of how far this strip (and by extension America) has slipped from the good old days, as “the doc” is some touch-feely psychotherapist who’s helping Tyler get in touch with his emotions and discover the reasons why he felt a need to hit himself in the back of the head with a stick until he bled; obviously his coach should be telling him to man up, push all those troubling “feelings” deep down inside, and hit other people with sticks instead. The third panel is completely incomprehensible to me. But I like panel two. I like the fact that Assistant Coach Kaz spends his spare time lifting free weights in … well, I don’t know where he’s supposed to be, exactly; it looks like he’s in the exercise yard in prison. I also like the fact that it’s totally obvious that Kaz has had some eye work done.

The “Lu Ann is being possessed or dying or something and nobody cares or even remembers she exists” bit is now becoming actively hilarious to me. And do we need any more proof that the Professor’s years of “paternal” attentions to the girls in 3G were basically driven by a desire to get into the pants of one or all of them? Now that he’s managed to somehow snag a babe even younger than them, his interest in their sordid paint-huffing adventures has vanished. 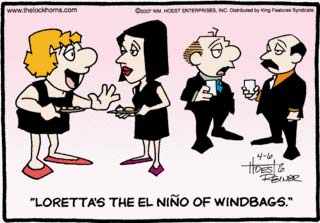 I have no idea what this is supposed to mean. But it is true that, thanks to Leroy’s listlessness and inattention, Loretta is like El Niño in that she comes once every three to eight years.

Wow, for someone who in the next few minutes is going to die either from suffocation or from a trip through a walrus digestive system, that fish sure is looking pretty darn cheery.