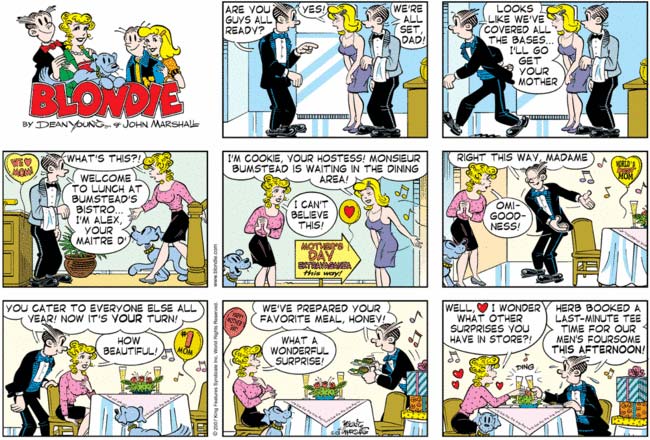 The saddest thing is that the central joke of this strip — that Blondie has been utterly charmed into an aroused frenzy by her pampering, and is eager to discovery what other surprises her husband has prepared for her, while Dagwood has one foot out the door as he’s planning to head out for a “men’s foursome” — is so in keeping with the well-established dynamic of the Bumstead marriage that I barely noticed it. The thing that really disturbed me is the heart that’s drifted up into Blondie’s word balloon in the final panel. I have no idea what it’s supposed to represent semantically. I suppose it could be “love” as a noun and term of endearment, rather than “love” as a verb, which it usually stands for — but then it ought to have a comma after it. Really, the fact that it’s sitting after a comma just makes it all the more anomalous to me. Mostly I’m worried that Dag and Blondie have ingested some kind of potent hallucinogen and now believe themselves to be conversing using abstract symbols rather than normal human speech. 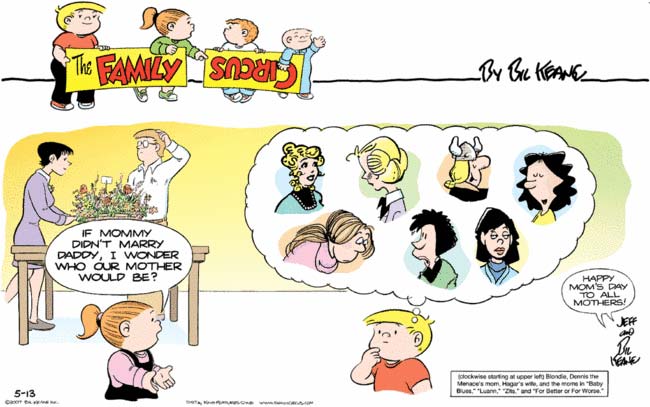 This strip is a subtle but powerful reminder of the strict laws of patriarchy that govern the Family Circus. Note that Dolly wonders who their mother would be if her parents hadn’t met, not who their father would be. On Mother’s Day, she assumes that her mother is just an interchangeable womb who could have been replaced by any number of other females from other times and places and their family would have remained pretty much the same.

I really enjoy the fact that all the other comics moms in Billy’s thought balloon are just sort of idly looking off into the distance, except for one. FBOFW’s Elly is looking straight at the eldest Keane boy in goggle-eyed horror, as if contemplating how excruciating it would have been to pass that enormous melonhead through her birth canal. 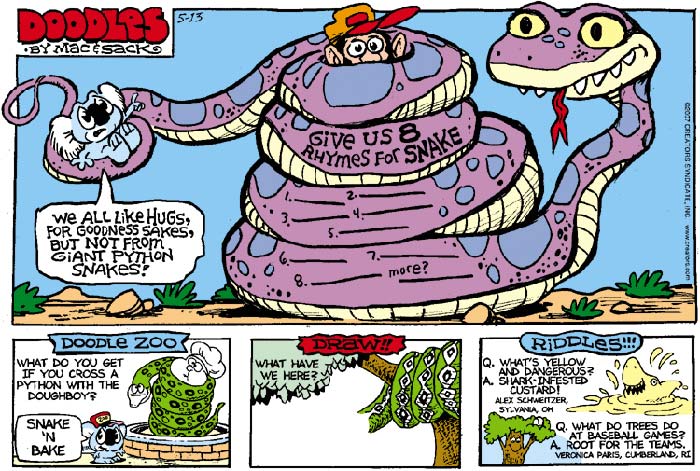 Someone’s kind of fixated on the idea of being crushed to death by a boa constrictor, and it makes me uncomfortable. I’m also disturbed the puffed-out cheeks of “the Doughboy” in the Doodle Zoo: they clearly indicate that he’s dying horribly as the smart-ass little koala cracks wise. I am kind of amused that the Doughboy seems to have lost his “Pillsbury” moniker at the last minute due to trademark infringement concerns, though it does bring to mind the notion of an American infantryman, having survived the hell of combat in the trenches against the Hun’s forces on the Western Front, being felled by an unexpected snake attack.

I’m not showing you the rest of this strip, because these panels perfectly set up the Dennis the Menace strip we’d all like to see, the one where Mr. Wilson murders Dennis with a pair of garden shears.

Since Vera’s so angry at Von, it’s ironic that she’s remembering him at the height of his glory: all decked out in his yellow suit, shirt, and facepaint, standing in front of that blue door, and disco dancing like nobody’s business.