So it’s been seven months and two plotlines since I’ve deigned to comment on Popeye’s spinach- and/or mescaline-fueled antics. If you’re not following along at home, I’m not going to give you any context for this, because it’s just all the more delightful as a surreal and horrifying standalone vignette. Olive Oyl laughing so hard that her jaw nearly unhinges as she presses the barrel of the gun to her temple, her breast-sporting doppelgänger laughingly urging her to blow her brains out as she slams her bracelets together with a hearty CLANK!, Wimpy ignoring the horrifying drama to demand more food — WHAT MORE DO YOU WANT IN A COMIC? In three panels, Popeye has managed to be more unsettling that the last 18 months of Zippy the Pinhead.

On a day that didn’t feature a beloved Popeye character cheerfully threatening suicide, this would surely be the funny pages’ most disturbing comic. “Oops, terrible mixup, we meant to order tanning beds but we bought cremators instead! Wondered why they were so big! Ha ha! So, yeah, we burned your wife to death.”

Wow, Crooked County Commissioner #1 sure is looking … distinguished, isn’t he? There’s just something about him that says, “Gosh, this handsome and paternal figure would never do anything illicit; rather, he would be an excellent person with whom to negotiate a delicate land deal involving public funds. And he just might be the right person to be the highly paid head of the county’s new airport authority! I wonder why I feel so simultaneously drawn to and respectful towards him now?” 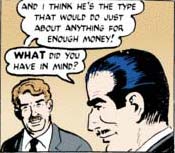 And, in the first panel … he also seems to be super cool as well! I know, mature and distinguished and super cool in one package? I don’t pretend to understand how he does it. All I know is that the new airport’s gonna be the best airport ever!

Perhaps you’re right, Marvin. But we can pass legislation that forces freaks like your mother — with their grotesquely oversized heads tottering atop their reedy, stick-like bodies in a most stomach-turning fashion — to live out their days in closed institutions where normal people can’t see them. And we will, if the letter I’m about to write to my Congressman has anything to say about it.

The heroine seems a little young to play the part, but everything in this cartoon — the meal of canned tuna and toast eaten right out of the can and toaster, respectively; the filthy house, crawling with rodents; and, of course, the dozens of hungry, hungry felines — screams “crazy cat lady.” But you know what? Once you realize the role you’re born to play in this life, I say, why wait?