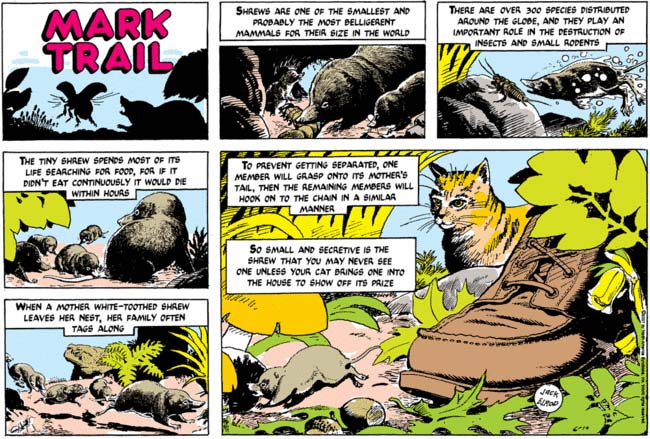 “Most belligerent animals for their size in the world,” huh? All right, nobody’s gonna mistake us for a bunch of namby-pamby, let’s-all-get-along types, we’ll admit. But do you two-leggers ever think that maybe there’s a reason we’re so belligerent? Huh? Do you?

Let’s start with the food angle. You know if you’re on a road trip, you sometimes say, “Oh, I don’t want to wait to get to Nashville to have dinner, let’s eat at the Sbarro at the next rest stop”? Well, imagine if the consequences of not stopping weren’t just getting hungry and cranky, but frickin’ droppin’ dead. And then, imagine that, instead of getting a baked ziti in a plastic container that you can easily take out to your car, you have to kill and eat an undersea bug the size of your head! Probably one with stingers or something. A frickin’ bug! And once you’ve eaten it, you’ve just got to start running (or swimming) around looking for more bugs to eat.

And then there’s the way you get treated. “Oh, look, how cute, your babies have formed a shrew-chain as they desperately cling on to your tail for dear life … oops, I just crushed them all to death with my enormous freakin’ foot!” And don’t even get me started on the freakin’ cats. “Hi there snoogy snoogums! How’s my sweet fluffy girl? Did you have a nice day outside? Awww, did you bring me a prize? You did! You brought me the corpse of an innocent shrew, who never did anything in its life to hurt you! Oh, look, it doesn’t seem to have any visible wounds — you must have batted it around until its internal organs were mashed to putty! How cute! Now let me take the body away and throw it in the garbage!”

It’s this kind of demeaning attitude that leads to a prevalent anti-shrew attitude in law enforcement agencies around the world. So, yeah, belligerent? Maybe we’re a little freakin’ belligerent. But maybe we’ve got some good freakin’ motivation.

P.S. We poop in your cereal boxes, FYI. 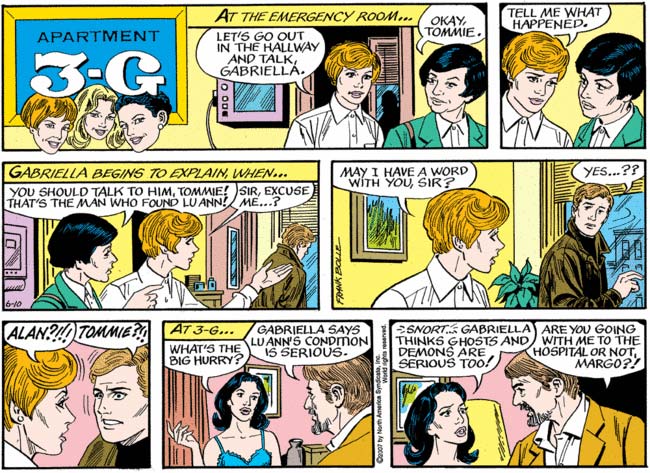 I mainly ran this so we can all continue to enjoy Margo’s bitchtasticness. Today, we see that her reluctance to go see her dear friend one-third of the rent for her apartment in the hospital may be more than a knee-jerk Margoism; she’s obviously just gotten collagen injections in preparation for Eric’s return from wherever it is he’s jetted off to, and she probably doesn’t want to go out in public for a few more days.

I do have to say re: panel five that I am getting a little weary of everyone being so stunned to find Tommie at the hospital. “So we’re at the emergency room and OH MY GOD THERE’S TOMMIE, WHO IF WE HAD SPENT MORE THAN FIVE MINUTES TALKING TO HER THE FIRST TIME WE MET WE’D PROBABLY HAVE LEARNED THAT SHE WAS AN EMERGENCY ROOM NURSE AT THIS VERY HOSPITAL!” It’s possible that, in a desperate attempt to get people interested in her, Tommie actually tells everybody that she has a much more glamorous career, as a CIA spy or Queen of Norway or something. It’s also possible that she’s so boring that nobody ever even makes it to the typical “so what do you for a living and where do you do it” part of that first conversation.

Tommie’s shock at seeing Alan is perhaps a bit more understandable, since he long ago swore a drunken oath to leave the evil metropolis of New York and all it stood for behind. Plus, he appears to be wearing eyeliner. 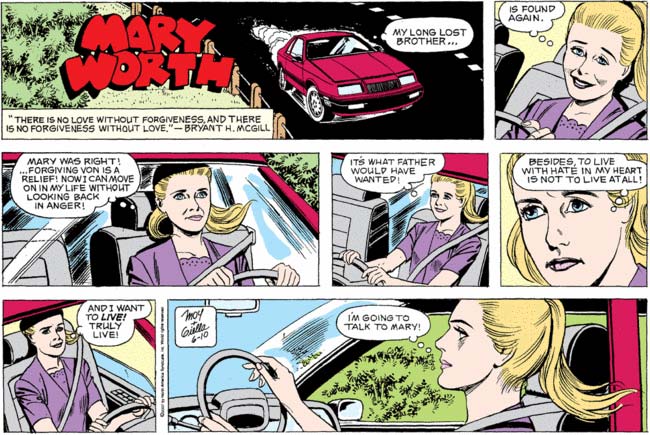 This may be one of the most horrifying Mary Worths ever, and not just because Vera looks like one of those soul-searing Margaret Keane paintings in panel five. We’ve watched Mary slowly break Vera’s independence and will over the past few weeks. Yesterday we saw saw the catharsis that came when she completed her Worth-appointed mission. Today, the upper level of her conscious mind seems to indicate that she yearns for freedom again, but her glassy expression and final thought — return to the programmer for further instructions — tell us that she’s still in the puppet mistress’s thrall. Of course, we all know that, now that Mary has convinced Vera to do the exact opposite of what she’s wanted to do for so many years, the innocent girl holds no more appeal to the meddling biddy; once Vera returns to Charterstone, Mary will just crack open her skull and feast on her brain, then have Dawn Weston post a “sublettor wanted” ad for Vera’s apartment on Craigslist.

I try to keep everyone’s exposure to Cathy to a minimum, but I do feel this panel is worth noting, because the phrase “Someone needs to relax! Let’s assemble a backyard gazebo!” is actually kind of surreally funny out of context. I’m pretty sure if you shaved Irving’s head and put a polka-dotted mumu on him, he’d be Zippy the Pinhead.