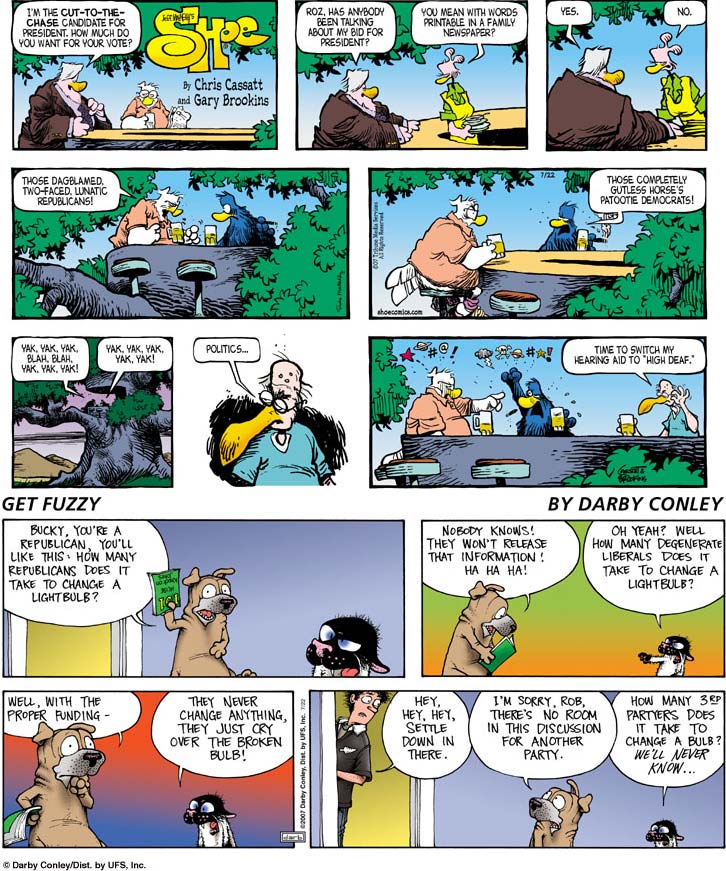 If you are a subscriber to the Baltimore Sun, you saw this precise constellation of quasipolitical comics when you opened your paper this morning. Both seem to be aimed at the same problem: making a relatively gentle joke about politics that isn’t actually political, and doesn’t result in dozens of angry letters to the editor. And, while usually I go on about just about everything at great length, the most important thing I can say here is that Get Fuzzy is funny, while Shoe isn’t. Shoe falls into the typical toothless trap of just saying “THE POLITICS AREN’T THEY ANNOYING?”, literally allowing the discussion to be replaced by meaningless placeholder syllables. Get Fuzzy works with established character traits — Bucky and Satchel’s party affiliations have been frequently noted, whereas I don’t believe Shoe and the Perfesser had political beliefs until they became necessary for this cartoon. Plus Get Fuzzy contains actual political jokes that are funny. I love the third-party punchline, but I love “Well, with the proper funding…” even more. 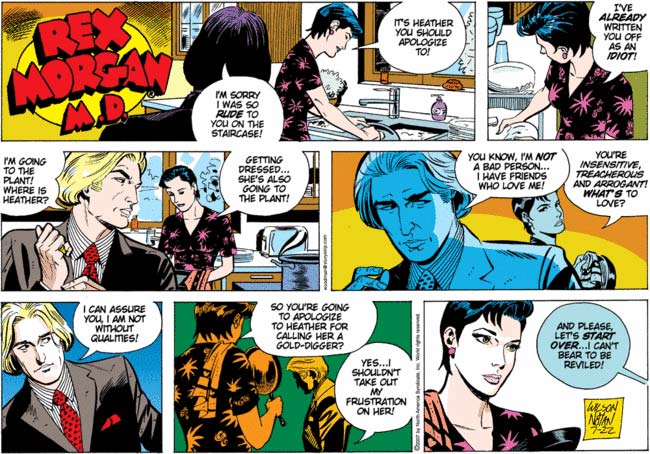 “I can assure you, I am not without qualities! I have a certain height, for instance, as well as a certain breadth and depth! I occupy volume in space! I have a certain skin color, and wear clothing, and inhale air and breathe out carbon dioxide! I have quantities, too, if you’d care to hear about them!”

With his constant wavering between unbearable upper-class superciliousness and desperate, raw emotional need, I’m frankly shocked that Hugh has somehow managed to remain a bachelor to this point. 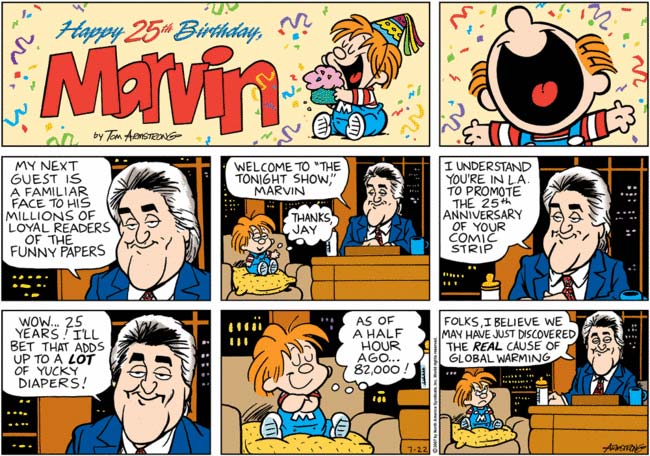 Marvin celebrated its 25th anniversary this past week with a series of painfully unfunny jokes about life in that long-lost age known as “1982.” (Dallas was on TV! Ronald Reagan was president! HA HA! STOP, YOU’RE KILLING ME!) Today, Marvin the baby appears on the set of the Tonight Show to exchange painfully unfunny jokes with Jay Leno. The fact that Jay Leno is, in fact, painfully unfunny in real life does lead one to wonder whether the lameness on display here is meant to be a brutally realistic exploration of what it would be like if a cartoon infant were on the Tonight Show. Frankly, I wish that they had carried on with the “life in 1982” conceit and done the interview with Johnny Carson, though presumably even after his death he has too much dignity to appear in Marvin.

Extremely creepy to me is the way that Jay Leno keeps his mouth shut throughout his unfunny dialog. The fact that Marvin keeps his own mouth shut and communicates with Jay (and, presumably, the viewers at home) telepathically via thought balloons for whatever reason doesn’t faze me at all, but seeing that lantern jaw firmly shut while the usual inane patter floats next to his head in a word balloon unsettles me a great deal. I do like the fact that Marvin’s bottle has been placed completely out of reach of his stubby arms, though. 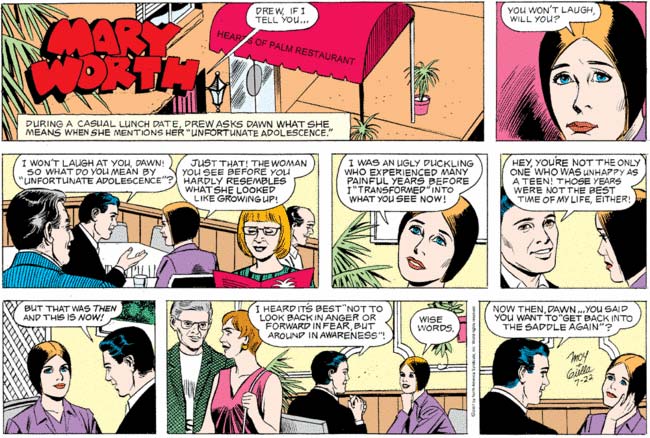 I can totally understand why Dawn was so nervous to offer this revelation up to Drew. After all, it’s totally possible that the good doctor was only on going on this date with her so that he could synchronize his retrochronometer onto her current form and then go back in time five years to date her past her self — wouldn’t it be disappointing if he had gone through all that trouble only to return to the present in disgust? Thank God he’s only interested in dating the beautiful swan Dawn of the here and now. Look at the lovely visage in the final panel — the octogonal face, the bright orange roots. You can see why he wants to “get into the saddle” right away! 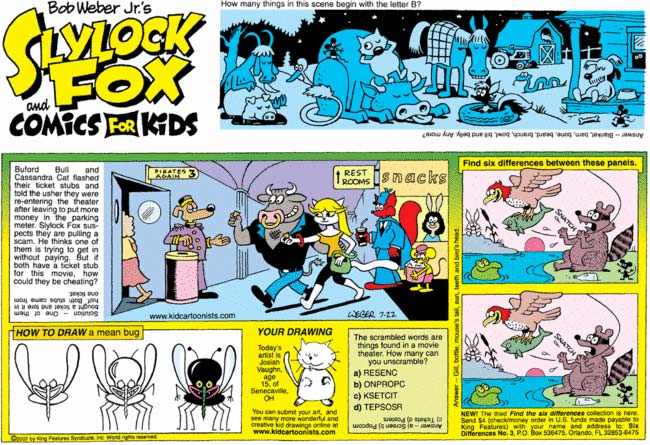 OH COME ON, SLYLOCK! We’ve moved from ludicrous acts of deduction to petty attempts to come up with ways that that Cassandra might be committing crimes despite the absence of any evidence. “Do they both have ticket stubs? They might have just torn a single ticket in half! Did they pay for those tickets with cash? They might have stolen that cash from a bank, or an old lady, or an orphanage!” I think we all know why Slylock is harassing this poor woman while she’s trying to enjoy an innocent evening out at the movies with her bovine companion. I can’t wait for the inevitable strip where Slylock uses his infallible crime-fighting skills to avoid the process server with the restraining order.