On Saturday, Eric Mills announced that he had picked up “something priceless” from the Orient. Today we learn what that priceless item is: his brother’s mouldering corpse. Actually, if he found it on the cold, dry Tibetan plateau, it may in fact be freeze-dried rather than mouldering, but either way it’s technically “priceless” because of course nobody would pay good money for it. (This also meant that he didn’t have to declare it on his customs form upon his return to the States.)

This shocking fact has sent his sister-in-law into a Level Four Swoon, though the segue from “missing” to “prayed his body would be recovered” seems to have skipped over a vital point. Presumably once a death certificate is on file, their illicit love affair can be upgraded from actual adultery to merely kind of icky, and Eric can dispense with his Margo-dating pretense. That should get ugly fast.

There are few things in this world more disturbing than panel two of today’s Gil Thorp. I mean, sure, we all like to see ol’ pearl-earring-wearing Heat-Miser-lookalike Coach Kaz give a drunken lout what for by punching him right in the teeth, and the fact that his girlfriend responded to his act of lightning-fast violence with a look that says “Do me right here in the middle of CAFE, I beg of you” is only to be expected. But where the hell is the rest of Kaz’s arm? As disturbing as the thought that his fist might have gone right through the Lout’s teeth and headed back towards the uvula is, at the angles we’re seeing, it just doesn’t seem possible that Kaz’s fist isn’t protruding out the back of the drunken fellow’s head. My theory is that the inside of this bottle-wielding field’s body is some kind of dimensional anomaly: he’s literally bigger on the inside than on the outside. This bizarre evolutionary adaptation presumably allows him to ingest a greater volume of alcohol than a normal human could contain without bursting open.

Today the Archie Joke-Generating Laugh Unit 3000 has actually manage to cobble together a gag that, if not “funny” per se, at least makes a vague sort of sense and is based on the Archie gang’s (admittedly broad) established characterizations. However, we do get an interesting indication that the AJGLU 3000 is not connected to the Internet. Sure, bizarre fake domain names are in fact used as the names of retail establishments in real life — my favorite is the newsstand at the Oakland airport called WWW.NEWS.OAKLAND — but Eat.com is actually the homepage for for Ragú®, currently featuring some “Soccer Mom Shortcuts.” (“Today’s tip: Your kids don’t have what you’d call ‘discriminating palates,’ so don’t feel bad about feeding them mediocre spaghetti sauce out of a jar.”) Presumably the domain was reserved by some smartie in the IT department of whatever multinational corporation owned the rights to the Ragú® brand in 1998; the current owner, Unilever, has deep Dutch pockets and teams of lawyers, so look out, AJGLU 3000, is what I’m saying.

(Note to outraged soccer moms everywhere: I feed myself mediocre spaghetti sauce out of a jar, and I don’t have kids who I have to shuttle to soccer practice, or even a job that requires me to leave the house, so please do not take offense at the above.)

Coming this summer, to theaters from Vancouver to Halifax:

When does their house … become your home?

When does accommodation … become self-abnegation?

When does a doormat … say enough is enough?

When does murder … become emotional self-defense?

Will any jury convict her?

All these questions and more will be answered in the thinking person’s summer blockbuster: Oedipus Wrecks: The Housening!

Driven to madness by the incessant basketball-dribbling of a bunch of young African-American fellows, Slim has decided to destroy the public court on which their noisy pastime is played by simulating a meteor strike. Dear God, I wish I had a made up a single word in that previous sentence. 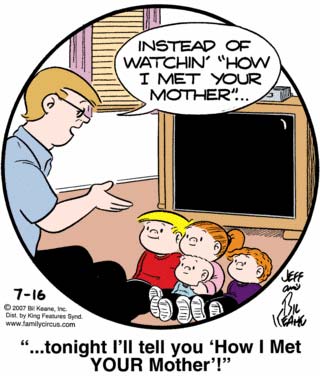 “So you see, the Great Leader used his Third Sight to recognize the sympathetic vibrations between us during Morning Inspection at the Compound. Three weeks later, we were joined in the eyes of the Unknowable God in the Sacred Dell, along with three hundred other people. The end. Now go do your homework.” 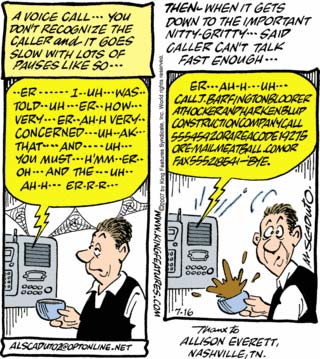 Hey, everybody! Today’s TDIET was submitted by “Allison Everett,” who’s really faithful reader Allie Cat! “Just to give you some backstory,” she says, “I log a lot of phone time with my work; my colleagues and I all get voicecalls (although we call them ‘voice mails’) like this daily and they’re irritating (and I haven’t learned how to rewind on my current system, so that makes me an idiot in my own right, but we won’t go there). Also, I don’t currently own a black sweater vest, but it’s on my list for fall fashion must-haves.”

Beetle and Killer are not putting their IED training to use in the ways that their superior officers might have hoped.