Hey, kids, didn’t your mothers ever teach you to either say something nice or not say anything at all? Well, I’m going to say something nice. I profoundly respect Liz an’ Anthony’s decision to flee in terror at the prospect of being forced into a conga line. That’s just good common sense.

On the note of their kissing and simul-thought-balooning, well, I … uh … BLAARRRGGGGGH.

There, it’s not saying anything if it’s vomiting.

Aw, yeah, it’s a CAT FIGHT FOR DR. DREW’S LOVE! Dawn Weston, who I believe (despite the evidence of her baby blue high-waisted slacks) is supposed to a college student, will have the advantages of youth, but I predict that those will not be able to stack up against Vera’s tightly-wound rage-filled nature. More entertaining will be the proxy battle for meddling supremacy between the two young people’s respective champions. Wilbur “Ask Wendy” Weston has, one must assume, always harbored a resentment against Mary, since his newspaper column yenta persona is clearly a pale imitation of the puppet master with whom he shares a condo complex. They’re both looking their best — Mary has finally managed to find a cravat the exact same color as her shirt, and Wilbur has gotten those five strands of hair to lay across his scalp just so — which will make it all the more satisfying when they tumble into the pool, hands locked around each other’s throats.

“So, kids, the history lesson you learned this semester was: People who appear to be helpful, friendly authority figures are in most cases desperately needy frauds.”

Oh, really, Rex, this isn’t right. Your wife saw him first. He’s just a simple teenage street hustler for New Orleans; he’s used to doing what he has to do, getting his money, and getting out. He isn’t emotionally prepared for the horrifying snake pit that is the Morgan marriage. Being caught in the Rex/June web of sexual spite is going to make him long for the comforting arms of FEMA.

God only knows what the good doctor is doing with that tennis racket. Presumably he found it next to the tackle box and thinks it’s part of the fishing equipment. 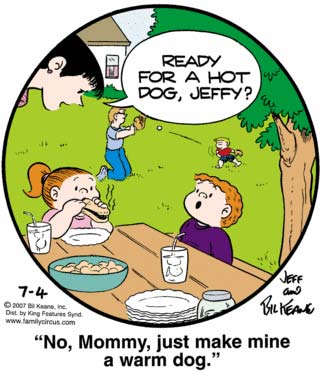 The social worker had seen a lot of awful things in his years working for Child Protective Services, but there was something about this case that he just couldn’t get out of his mind. After a child’s agonizing death from salmonellosis, you’d expect the mother to be pretty rattled. But all this one kept saying — at the investigation, and later at the trial — was “He asked for it. It was what he wanted.” That was bad enough, but it was her little half smile that the social worker kept flashing back to while he was trying to fall asleep. Spookiest thing he ever saw, by God.