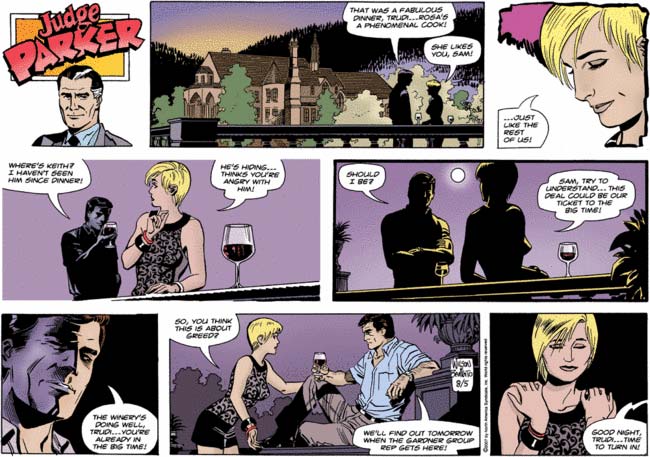 Wha … buh … WHO IS THAT DISTINGUISHED-LOOKING OLDER GENTLEMAN LURKING BENEATH THE STRIP’S LOGO? Why, that’s Judge Parker, natch, just like the label says! Hizzoner has appeared in this strip exactly twice in the three years or so that I’ve been reading it, but I like the way he’s staked out his position in panel one here so that he can still claim proprietorship. “I may not jet off to find lost treasures in Mexico, or to tussle with punks in Paris, or get involved in high-stakes real estate deals in the Napa Valley — but I’m still Judge Parker, damn it! Without me the rest of you losers are nothing, do you hear me? Nothing!” Presumably he’ll remain in the first panel of the Sunday strips, glowering manfully, until his totally-not-gay son Randy cruises to an easy election win and becomes a judge himself. Then Judge Parker the Senior, no longer needed for his one current duty of justifying the name of the strip, can drop dead post-haste.

In the ostensible “action” of today’s strip, Sam and Trudi are doing a little dance around the patio or balcony or wherever the hell it is they are. Sam’s presumably ducking and weaving because he’s afraid of losing an eye to one of Trudi’s pointy, bullet-like breasts. Still, leaping up on the railing and striking a pose out of the Cosmo’s sexiest male comic characters feature may have been a little much. 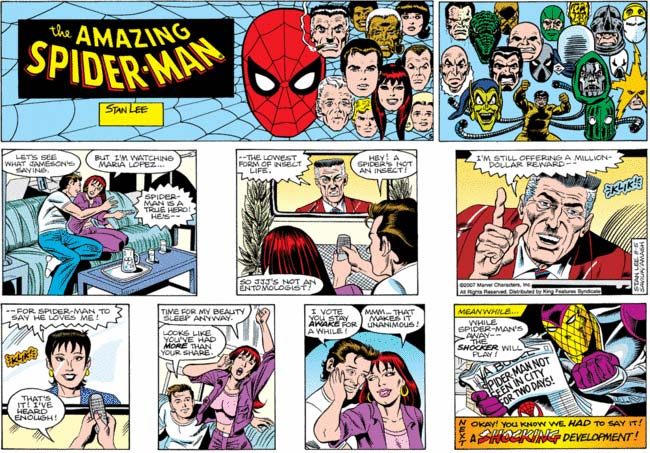 Speaking of breasts, I wish — oh, how I wish — I had time to hunt through the Spider-Man archives to prove this, but I’m pretty sure that Mary Jane’s “Oh, I’m so tired, I think I’ll stand up and stretch in a way that is advantageous to the display of my unusually large chest” in panel five is a fairly regular occurrence in this feature. Today’s is more blatant than most because she’s wearing the skin-tight pink fuzzy belly sweater that’s all the rage with the movie stars this season.

Meanwhile, in the final panel we’re introduced to the Shocker, who, based on what generally goes on in this strip, I must assume is an eccentrically dressed network programming executive who plans on picking up a number of shows that will annoy Spider-Man now that he’s turned the TV off. 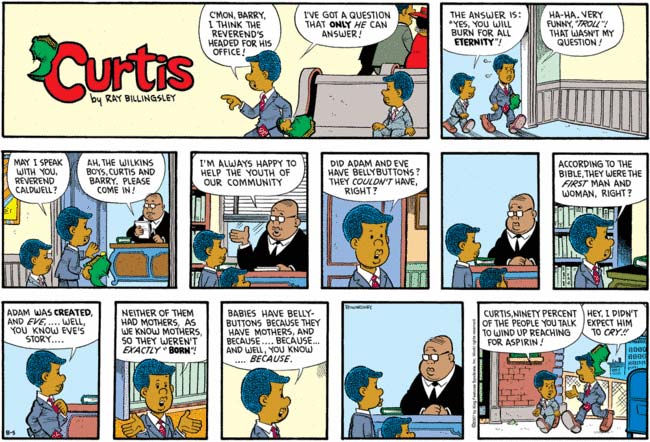 For those who believe in a more or less literal interpretation of the Genesis creation story, the question of whether Adam and Eve had navels — and, for that matter, whether the trees in the Garden of Eden had growth rings, or whether anything that was created by God in the beginning carried evidence of age — has been a subject of theological discussion since at least the time of Saint Augustine. There’s actually an Answers in Genesis pamphlet on the subject, and the philosophical issues arising from the question gave rise to the so-called omphalos hypothesis. Thus, Rev. Caldwell ought not to have been reduced to weeping, sputtering incoherence by Curtis’s question, like a computer in the original Star Trek series presented with some elementary paradox. One can only assume that Caldwell had a sudden panic attack because his claimed divinity degree is a fraud that he purchased online for $10, and that he’s afraid that his theologically curious congregation, led by young Mr. Wilkins, will soon discover that he’s been skimming off the collection plate for years and plans to decamp to the Cayman Islands very soon.

Speaking of theological conundra, I’m a little disturbed that Barry is both so convinced that Curtis will be condemned to an eternity of torture in hell and that he’s so smug about it. On the other hand, Curtis does wear that damn hat with his church clothes, which can’t be pleasing to the Almighty. 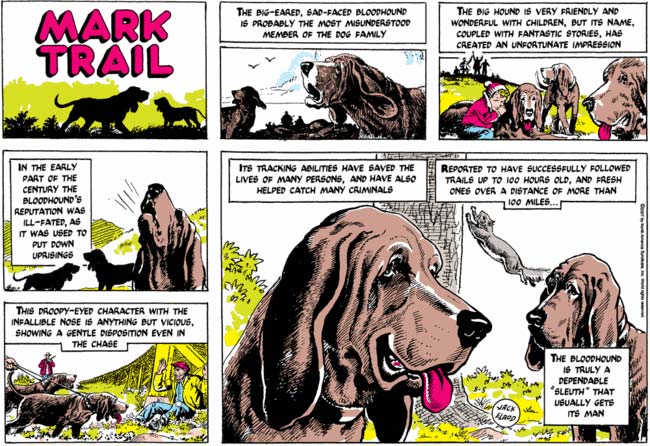 Jesus, the final panel of this strip — aka Salvador Dali’s “The Persistence of Bloodhounds” — is going to haunt my dreams for weeks. Mark is all very upbeat about bloodhounds not mauling your children to death despite the breed having the word “blood” in its name, but you notice he doesn’t say anything about the emotional scars of seeing melting dogface every morning when they wake up.