I guess I’m supposed to be saying something about FBOFOW’s mini-flashback this week, huh? Uhhhh … well, I support the strip’s bold decision to use a Pulp Fiction-style fractured, nonlinear narrative. Really, when we heard about the “flashbacks,” we had no idea that they’d be jumping willy-nilly through time, enriching our understanding of the themes with foreshadowing of future events and filling in the details later on. I’m really looking forward to seeing how avant-garde the Foobs can get! Maybe it’ll even surpass Gil Thorp.

I also like the fact that Thérèse is now responsible for everything that is evil and wrong and dark in the world. Global warming? Thérèse’s fault. Cancer? Thérèse’s fault! The mustache? THÉRÈSE’S FAULT! Soon we’ll find out that Kortney and Howard were both Thérèse wearing very clever disguises, and that Thérèse was lurking beneath the stream back behind the Patterson house wearing SCUBA gear, just waiting to drag Farley to his death.

There are lots of reasons to love Blaze, but the top one, as far as I’m concerned, is that he’s the only young adult male in the strip who’s actually easy to identify on sight. Almost everyone else in the strip with a Y chromosome between the ages of 20 and 45 falls into one of two templates: the blandly attractive dark-haired guy (e.g., FBI Pete, millionaire janitor Scott Gaines) or the blandly attractive sandy-haired guy (e.g., Eric Mills, Alan). Blaze has his own style going on. Admittedly, this style involves a slightly shaggy haircut and a khaki shirt and black cravat that he puts on every morning before he sits down to eat his off-brand corn flakes. I’m not exactly sure what it’s supposed to signify. I’d say “gay” but that doesn’t seem right; perhaps it’s “gay, as drawn by someone who doesn’t actually know any gay people but who sometimes reads about them.” 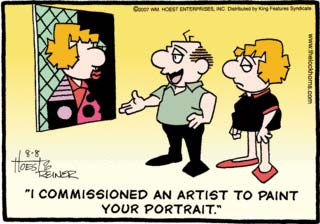 Usually the Lockhorns is about as subtle as a restraining order, but I have to admit that I’m puzzled by this one. Does Leroy have a heretofore unexplored love of modern art? Does Loretta have a heretofore unexplored hatred of modern art, and Leroy spent good money on this portrait just to spite her? Is the fact that the portrait isn’t strictly representational supposed to be some kind of visual shorthand for “bad”? Is it creepy that the hair in the painting appears to be an exactly cut-and-paste version of the hair on Loretta’s head, flipped 180 degrees? I know the answer to the last question, anyway (it’s “yes”). 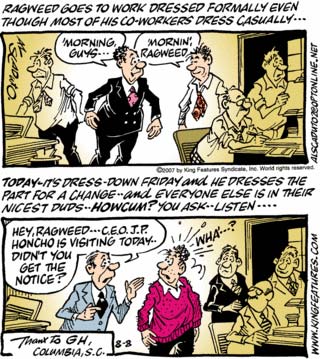 Hey, everybody! GH is none other than faithful Comics Curmudgeon reader … gh! It’s fun to imagine him in his impeccable suit surrounded by shlubby shlubmeisters in four-inch ties, but you should always remember that dress-down Friday doesn’t mean don’t-shave Friday. gh was also one of only two Curmudgeon readers to have an entry accepted by Pluggers, making him a potent double-threat. Can anyone else go for the bifecta?

Tune in next week for another exciting adventure of Dagwood Bumstead: World’s Shittiest Union Organizer!