Ho ho! Hi’s decided to take his family on a bizarre Western “dream vacation,” which, as we’ve seen over the past week or so, several of the Flagstons are dubious about. Now we learn that they couldn’t even afford the trip! Hi knows the family is being crushed by credit card debt, and he’s looking desperately for some magical way to get out of the hole! Maybe they’ll go bankrupt and their house will be repossessed! Too bad about that housing bubble bursting, eh Lois? Wait, where’s Lois? My guess: prostituting herself so they can afford dinner tonight, or perhaps committing suicide.

Hee hee! Cookie has one job to do at Camp Swampy — one — and he’s terrible at it, and everybody on base — the men who are supposed to be his comrades — lets him know it. Naturally this is killing him inside, so he climbs up on the roof. Maybe he just wants to get away for a bit, maybe it’s a plea for attention. Either way, the soldiers’ hatred is just further inflamed, and they openly call for his suicide. 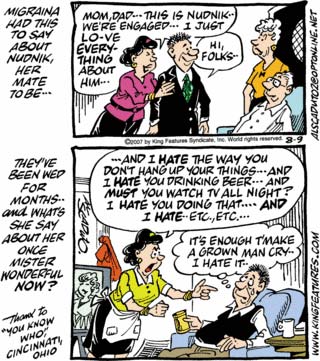 Hardy hardy har! That feeling of overwhelming love and oneness you get at the beginning of a relationship? Turns out it’s just equal parts sexual attraction and self-delusion! Once you’ve finally chosen to spend your life with a person, that’s when the scales fall from your eyes and you realize you’re chained to another insufferably imperfect human being, forever — and the only way out is suicide.

It’s been pretty well established that what’s-his-name, the dude with the gun, is pretty reluctant about using it, so it’s actually fairly plausible that this couple could literally be beating up an armed man with both hands tied behind their back (the husband is doing the head-butting today, but yesterday his wife managed to get in a good foot to the groin). This is fortunate, because otherwise the Ghost-Who-Doesn’t-Do-Much might have to intervene, which would cut into his valuable musing time. 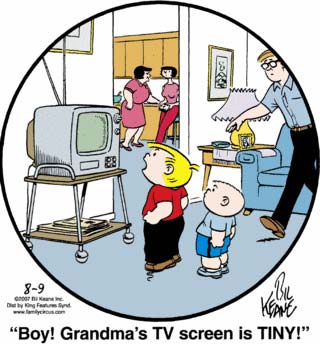 I feel weird saying this about the Family Circus, but there’s a lot I love about this cartoon. I love that Billy looks genuinely angry that he’s going to be spending four valuable hours a night staring at this tiny television set while they’re at the grandparents’ house — so angry that he appears to be shouting at the screen at the top of his lungs. I love the look on Thel’s face in the other room, as she realizes that her unruly, obnoxious children are once again going to make her look bad in front of her own parents. I love the way Big Daddy Keane is marching in from off-panel — because this is a panel from the pre-PC ’70s, presumably Billy will be getting the strap again in short order. And I love the fact that PJ is awkwardly holding his shorts up, probably because he’s just crapped in them.

Drew, you’re a healer! You took the Hippocratic Oath! And yet your colleague here is clearly either having a stroke or is bombed out of his mind on the job, and all you can say is “Geez”. For shame!