Hey, kids! Before we tackle today’s comics, we have to go back to yesterday’s TDIET: 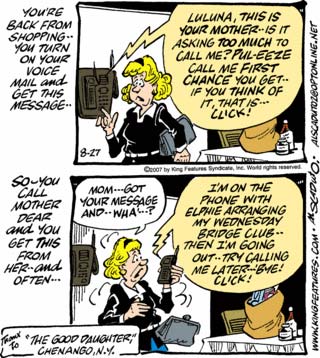 Why this trip into the wayback machine? Well, it turns out that “the good daughter” is faithful Comics Curmudgeon reader TaxiGirl! She provides the real story behind this little drama:

In the interests of strict accuracy, my mother usually isn’t arranging a bridge meeting (I’m not sure if she’s ever played bridge in her life) — but “My mother demands that I call her back urgently … and then inevitably has to go to the bathroom as soon as she picks up the phone” apparently doesn’t suit this sort of a family feature.

The first panel, however, is right-on.

Sadly, this does not appear to give me “The Urge.”

I’m just amazed that Luluna’s phone is a wireless handset that could have actually been sold in a store in the last ten years.

And now on to today:

“Hello, there! We’re the cast of Baldo! We know that you normally turn to us for gentle humor about family life, teenagerhood, and the Latino experience in the United States. But did you know that we wouldn’t be able to bring you this enjoyable thirty seconds of the day if it weren’t for … newspapers? That’s right! They aren’t just repositories of day-old stories, stock prices you could look up on the Internet, news about city politicians you’ve barely heard of, and incomprehensible legal notices — they also keep cartoonists gainfully employed! So, for the love of God, please, keep subscribing to the damn newspaper! You don’t want Baldo’s creator to have to go back to a real job, do you?”

And so the trip straight to the heart of death-flavored madness … begins! At first, I thought this might be a reference to that hospice cat that always seems to know when the patients are going to die, but clearly it’s seeking out Les, not Lisa. So it has a different kind of ability: namely, the ability to tell when someone is about to begin a booze-fueled descent into depression!

Also, it can talk, apparently? Yeah, sure, what the hell, why not.

Not being a golfer myself, I use the comics as a sort of anthropological window into the golfing lifestyle, since so many comics artists seem to be obsessed with the game. For instance, it never occurred to me that you’d put on sunscreen to go play nine holes, though having read this of course that’s obvious. And it also never occurred to me that, if it were sunny enough to require sunscreen, you’d still leave on your ink-black, presumably wool suit, because they like formal attire on the course. And I never would have guessed that, if you skip out on work once in a while to do something you enjoy, you wouldn’t tell your wife, the person you’re ostensibly closest too, unless there was some other way that she’d find out. And finally, it was never so clear to me as it is now how “putting on sunscreen to play golf” would be a great cover for putting on sunscreen to go to a nude beach. The comics: so educational!

Yup, ever since the Wal-Mart opened the next town over, there’ve been some changes in this plugger’s local neighborhood. Not to complain: now milk’s thirty cents a gallon cheaper, and isn’t that worth an extra twenty minutes or so of driving? But you can’t blame him from talking in the past tense: “take a left at the huge, empty, greyish husk of a building, go a couple of miles and it’s on the right across from the mid-sized yellowish burnt-for-the-insurance money husk of a building, next to the Dollar Store” just sounds depressing.

Mary’s “Uh-oh!” can’t be about Dr. Drew’s two-timing, since she doesn’t understand or care about ordinary human concepts like “love.” No, she’s more worried that he’s stealing her patented schtick: talking in annoying aphorisms with quote marks around them even though they don’t really appear to be quotes from anything. Also, he’s apparently been taking fashion advice from Ian Cameron — always a very, very bad sign.