At some point between my childhood, when I read and disliked Marvin, and my decision a few years ago start reading and disliking Marvin again, the strip expanded somewhat from its initial emphasis on infant-related humor. In these days of shrinking newspaper circulation, this may be because babies very rarely actually read the comics. Anyway, Marvin now also features thought-ballooning-animals (who don’t read the paper but who have been repeatedly demonstrated to appeal to those who do) and cranky old people, who do definitely read the paper (boy, do they ever). Fairly typical of the Marvin old people schtick is today’s comic, which features two sick, angry old men, their body language transparently demonstrating their mutual dislike, sitting together (because they have nobody else to spend time with, except their even more hated wives) at the mall (because they have nowhere else to go).

By the way, Roy’s “I hear you” isn’t a way of showing solidarity or agreement or anything like that; it’s part of this duo’s continuous game of mutual oneupmanship, and he’s just boasting that he hasn’t gone completely deaf yet. 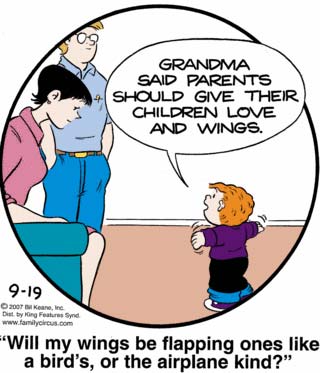 “Actually, Jeffy, after years of horrifying mistakes and experimental subjects that had to be put down as an act of mercy, Grandma determined that it’s best to go with leathery, bat-like wings. She’ll be forming them out of the skin from your thighs, since you won’t be using your legs anymore. Oh, also, you’ll be living in her basement from now on, OK?”

Haw haw! It’s like men are from Mars, and women are from Venus, am I right, everybody? Like two different planets entirely! Haw! Also, it’s like women will believe completely bogus statements and men are high all the time! Haw haw!

Pluggers are both unbearably cheap and completely thoughtless.

Oh, and confidential to everyone who couldn’t get enough of yesterday’s slap-happy Mary Worth action: thanks to faithful reader Dingo, you can get in on it!