OH SNAP DR. DREW GOT SERVED! That slap is no mere blind lashing out on Dawn’s part; her right fist is cocked in panel one, but she’s clearly chosen to go for the open hand to maximize the humiliation factor. She neutralized Vera in panel one with a quick pinch to the jugular, so clearly she’s a woman who’s in total control of her hands in a situation like this.

This is clearly the most exciting Mary Worth since Aldo plummeted to his death, and keep in mind that it’s only Tuesday. Things in Santa Royale always escalate over the course of the week, so by Saturday we’ll have achieved near-stratospheric heights of either wanton violence or emotional despair.

I have the uneasy feeling that this new A3G subplot is taking place in a weird parallel universe, where there’s been some effort put into establishing Ruby’s character and showing that Professor Smooth Operator has been eyeing her from afar for some time. Maybe all those deleted scenes will be on the unrated special edition DVD. As it is, all we can really hope for is an outraged Gina spotting Aristotle two-timing her and making with the slap attack.

Wow, Marty Moon appears to be about ready to fall asleep in mid-sentence in panel three. He can’t stay awake for even a single quarter of Mudlark gridiron action! In his defense, Gil Thorp football is really confusing and boring, and he’s probably pretty drunk.

“Yes, maybe we’re in luck! Of course, it will also come out that we spent millions in bribes to get permits to allow us to build an enormous mall so close to a flood-prone lake that even a few inches of rain will put the Banana Republic under a foot of water. The press will also probably get wind of the fact that the development company’s CEO and chief counsel are chalk-white undead zombies. But at least this damn duck situation will be taken care of!”

I don’t have the spiritual strength to go hunting through the archives, but I’m pretty sure that this Plugger panel, in which a polka-dotted boxer-short-clad Rhino-Man clutches his massive gut and peeks at the scale with trepidation, has been used before. Of course, given how many Pluggers jokes boil down to “Pluggers are fat”, they could probably run it once a week or so. 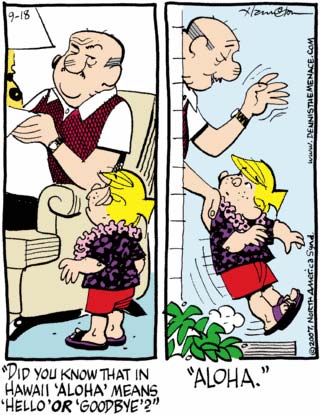 Wait, did Dennis dress up in a quasi-Hawaiian garb just so he could deliver this fun fact about the word “aloha” to Mr. Wilson in style? Here’s a hint, kid: Themed costume + fascinating trivia item = levels of menace so low as to be undetectable by even the most powerful scientific instruments.