And once again, another Milford football season begins with defeat, vandalism, and desperate media spin. I may not know much about football (I went 0-3 this week in my family’s friendly betting league, setting me up to go out of the running altogether next week in some kind of all-time record for futility) but I can tell you that if the coaching staff of Valley Tech or Oakville or Generic WASPy Name High or whoever the Mudlarks are playing next week haven’t worked out that “awful quarterback + vaguely competent offensive line = working on screens and draws”, they’re probably even worse at their job than Gil, and may actually be Europeans who are confused by the odd shape of this so-called American “football”. Thus, Gil’s “off the record” comment to Marjorie (I think that’s Marjorie, right? Snoopy reporter girl? Broke the head-bashing Tyler story wide open, just like Tyler broke his head wide open?) seems particularly pointless, as it’s hard to imagine what she’d do with it, journalism-wise, other than just, you know, report it. Maybe Gil knows that by making her feel like she’s privy to insider information, she’ll remain his pliant media mouthpiece, leaving Marty Moon the only reporter who dares ask the tough questions of Milford’s althetics politburo. It can’t make that much difference in the long run, since the Milford Star, like most high school papers, probably only publishes two or three times a semester, so this interview probably won’t run until the Mudlarks are already out of the running for the playdowns.

Meanwhile, panel three is about the saddest thing you’ll ever seen in your life, as a trio of Milfordians hang their head in shame at the savage spray-painting the front of the school received. There’s nothing more humiliating than losing a football game by 10 whole points, so surely these kids are going to be way too depressed to learn anything today. I do like the fact that, if Gil’s segue is to be believed, the athletic department is responsible for cleaning the graffiti up. I can just see the janitor sneering at Coach Thorp and saying, “I’m not doing it! This never would have happened if your team wasn’t so shitty.” 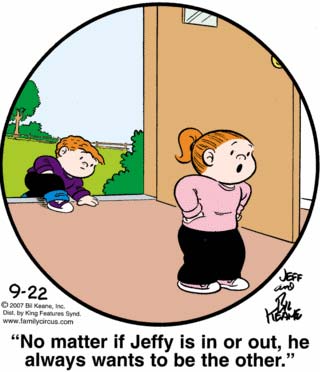 You know how sometimes a cat doesn’t seem to know whether it wants to be inside or outside? Oh, that’s always funny when that happens! So it’d be just as funny when a little kid does it, right? Of course! Well, except change “funny” to “indicative of crippling obsessive-compulsive disorder.” Poor Jeffy is hopping back and forth over the door lintel, tormented by an inner drive that he can’t really grasp, only knowing that it’ll only be OK for him to come in the house when he gets it just right. So he goes in, then out, then back in, over and over, until his little thighs get so tired that he just collapses in the doorway, and all Dolly can do is stand there with her hands on her hips and say “Mommy, I think Jeffy’s stupid.” Nice support you get from your family there, Jeffy.

I have to admit that other than the horrible stub-fingered hands that are omnipresent in the strip, I really do like the art in Dick Tracy. It has a very distinct stylized aesthetic that is both unique and unmistakable; Gretchen’s crazy eyes looming menacingly over that wrapped package could appear nowhere else in the newspaper. I also think that events in the individual strips actually have a great internal rhythm. It’s only when you start contemplating the continuity as a whole that it dissolves into a sea of incomprehensible nonsense. I was sort of hoping that Gretchen and her spy flunkies would crash their helicopter directly onto the Baron, killing all four and removing any chance that any of the details of this baffling plotline would ever be clarified. Instead, we’re presumably going to get Gretchen running endlessly towards the Pentagon or whatever for three weeks, following by the bomb going off in her hands and some cryptic explanation from Detective Tracy. At least we’ll get to see someone blown to bits, which is also an event that could be portrayed nowhere else in the newspaper quite as graphically as I expect we’re going to get treated to here. 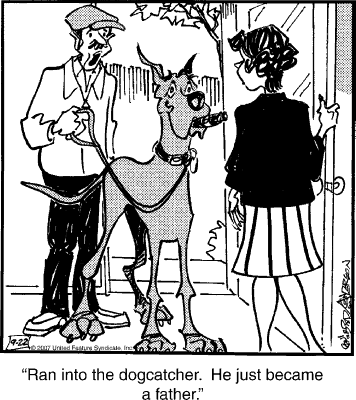 Having failed in all of his other attempts to stop this huge, rampaging hellhound’s reign of terror, the dogcatcher has decided to try to kill Marmaduke with lung cancer.