“Here, Margo, you might want to ‘amuse yourself’ over here by my desk. Right in front of this Webcam, which is totally not at all turned on and connected to the Internet. Have fun! Heh heh, ‘twiddle my thumbs’…”

So as far as I know, in a D.C. context “the Rotunda” is the space under the big dome thingie in the middle of the Capitol building, which means that Gretchen just suicide-bombed (is there an active verb form of “suicide bomber?”) Congress, eliminating the legislative branch, throwing the U.S. government into chaos, and presumably ushering in an “emergency regime” that will last indefinitely and be fronted by Dick Tracy, a well-known authoritarian sadist. This will definitely be more interesting than the last few weeks of this strip, which mostly consisted of aimless driving around.

Marty Moon’s days of drunken debauchery must have been a lot wilder than I thought, because it looks like he lost an eye when someone attacked him in a bar fight with a broken bottle. He’s so excited by the Mudlarks’ late-game collapse, he hasn’t even noticed that his glass eye is veering wildly to the right.

Never mind the little spat over who gets to be TJ’s “partner”; doesn’t it smell kind of fishy that Brad, an employee of the Fire Department, will be helping secure a no-bid, taxpayer-underwritten contract with said Fire Department for the catering business that he’s secretly moonlighting for? The whole sordid deal will climax with eight weeks of hearings before the city council’s Ethics Subcommittee, at the end of which you will be begging for a return to the “Luann and Bernice fight about Ben” storyline. 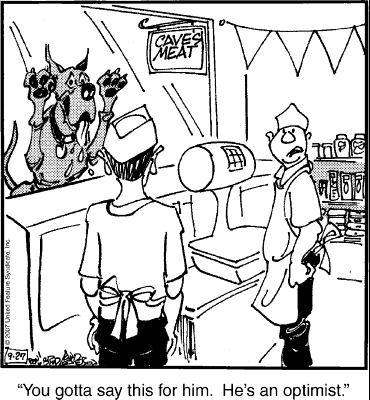 Is anyone else as creeped out by the name of this butcher’s shop as I am? It’s like, instead of a storeroom or walk-in freezer at the back of the store, there’s just an entrance to a cave. A cave full of meat.

It’s been well established that One Big Happy’s Joe is ignorant, and willfully so. Today he’s covering his face in a desperate attempt to block out new knowledge of any sort. This must be heartbreaking to his father, who loves learning so much that he’s chosen to subscribe to the premium digital cable package just so he can get the Algebra Channel.