You’d think I’d be disappointed by Margo’s failure to unleash an act of unspeakable violence upon Eric Mills for his failure to marry her, but frankly I’m finding “stiff upper lip/intense self-delusion Margo” even more entertaining than “man-killing Margo” would have been. Lu Ann’s extremely restricted amnesia is also back, because she has clearly forgotten her upcoming art show at the Mills Gallery once again; she wouldn’t look so damn perky if she realized that this nepotistic appointment will put Margo in charge of her and her ex-junkie boyfriend/curator, whom Margo holds in contempt. On the other hand, maybe she’s secretly so despondent about her brain damage that she’s attempting suicide-by-Margo; no one can expect our gal Magee to repress her rage forever, particularly when being needled as she is in panel three. Tommie sees enough blood and broken bones at work, which is why she’s covering her eyes. 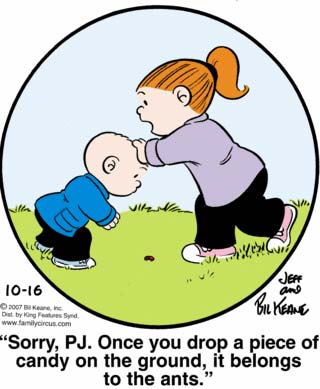 Dolly, ever the kiss-up, has apparently decided that the ants will inevitably emerge victorious in their long war against the human race. She imagines that when she’s prodded by the warriors’ mandibles into the vast breeding chamber, she’ll be able to say to the queen, “Your majesty! I have always been a friend to the ants! I made sure that the choicest morsels that fell to the ground remained there! I favored the ants over my own brood-mates!” But the sinister colony insects don’t understand human qualities like “loyalty” or “forgiveness,” Dolly. You’ll be sucked dry of your nutritive value and used to feed the larvae, just like everyone else.

AHHH! PEOPLE! THIS ROBUST, OAKY MERLOT IS MADE OF PEOPLE! YOU’VE GOT TO BELIEVE ME!

Nice try, Niki, but Rex Morgan doesn’t use fatties for arm candy. You can have the diet soda, or you can have ninety minutes on the treadmill — your choice.