Dear Archie Joke-Generating Laugh Unit 3000: I realize that placing a character’s name in apposition with a role that character plays or a task he fulfills is a quick and efficient means to provide information needed to set up a joke. However, this grammatical structure is almost never used in actual conversation between humans, and it comes across as incredibly stilted. I don’t blame you for the mistake, as you do not actually communicate verbally with biological life-forms, but I would like you to file this away in your humor-generation ruleset.

Also, jokes about text messaging are not funny, and haven’t been since the end of a relatively brief window in the late 1990s. I can understand why the notion that transmitting data electronically could cause physical pain might seem incongruous and amusing to you, but trust me on this one.

Oh, this is just about the saddest thing I’ve ever seen. Don’t you believe it, Beetle! Every blow from Sarge’s fists is really a kiss that he can’t allow himself to give you. 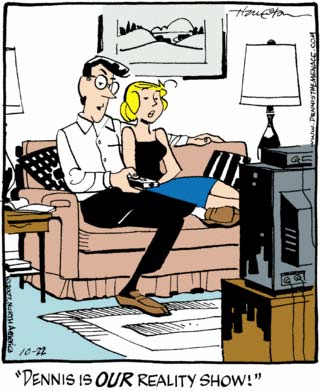 “Especially since we put all those cameras in the basement and then locked him down there. Ha ha, look! He’s clawing at the door again!”